Journalists frequently treat the metropolitan area as just one city. For example, in 1998, Newsweek included the Champaign-Urbana Metropolitan Area in its list of the top ten tech cities (outside the Silicon Valley). Champaign-Urbana also ranked tenth as one of the top twenty-five green cities in the United States, in a 2007 survey made by Country Home magazine.

A number of major developments have significantly changed downtown Champaign since the beginning of the 21st century. Beginning in the 1990s, city government began to aggressively court development, including by investing millions of dollars in public funds into downtown improvements and by offering developers incentives, such as liquor licenses, to pursue projects in the area. Downtown, the new 9-story M2 on Neil project was completed, including offices, retail, and condos. Across the street, a 9-story Hyatt Place boutique hotel has also opened. In the Campustown area adjoining the University of Illinois, a new 24-story highrise apartment building has been completed and is 256 feet (78 m) tall. This highrise, called 309 Green, is three stories higher than the older 21-story Tower at Third. The Burnham 310 Project, at 18 stories, which is also taller (in overall height), was finished in the fall of 2008 and includes student luxury apartments and a County Market grocery store. Burnham 310 connects downtown Champaign to Campustown. In 2013-14, four other mixed-use buildings (apartments above commercial) have been built in Campustown, with heights of 26, 13, 8, and 5 stories. On the University of Illinois campus, Memorial Stadium has gone under major renovation, with construction of new stands, clubs, and luxury suites. Across Kirby Avenue, the Assembly Hall, first built in 1963 and renamed the State Farm Center as part of a major renovation begun in 2014, continues to be the home of Illini basketball and is expected to resume hosting concerts and other performing arts after renovation is completed in late 2016. In the late 2000s, the restoration of the Champaign County Courthouse bell tower capped the expansion and renovation of Courthouse facilities and provided a striking focal point in downtown Urbana. These, among other developments, have given the Twin Cities a more urban feel.

The outlying parts of the metropolitan area differ from the suburban areas of many other metropolitan areas. Instead of a sprawling suburban skirt that encircles the urban area, the urban area abuts large swaths of farmland, with small to medium-sized villages that originated as farming communities. But, as the willingness of professionals to commute longer distances has increased in recent decades, new residential developments have arisen on their edges, dotting the surrounding landscape. Some of these villages are home to as many as 5,000 residents or more, but most are significantly smaller. 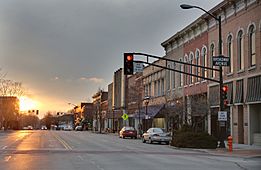 Most of these outlying communities, such as Savoy, Mahomet, St. Joseph, and arguably Rantoul and Monticello as well, are dependent on Champaign and Urbana for economic and infrastructure support. Predominantly, these cities and villages lie in Champaign County. These areas are populated to a substantial extent with commuters who work in Champaign or Urbana, but reside outside of the two cities. Because higher paid professors, doctors and technology professionals who work for the University of Illinois at Urbana-Champaign, the many clinics and hospitals in town, or in the Research Park, are more likely to maintain cars for commuting longer distances and to afford owner-occupied single-family housing, these areas lacking in mass transit and high-density rental projects often have a higher median household income than Champaign or Urbana.

In addition to residential developments in the surrounding, formerly agricultural communities, residential neighborhoods are also growing up in unincorporated areas within a short radius of the city limits, while the cities themselves are also expanding to annex areas of new development. While the annexed areas benefit from municipal services, developments that are willing to forego city sewer systems, libraries and police protection can enjoy the lower tax rates the surrounding townships levy, as fewer services are provided. Areas currently under construction extend as far as around Rising Road west of I-57 and north and east of Willard Airport. Some of this land is in Champaign Township, while some has been annexed to either Champaign or Savoy. Additional land development is occurring north of I-74 in land annexed by both Champaign and Urbana. On the eastern side of the city of Urbana, new business developments such as a Meijer, a planned Menards, and a commercial center with many restaurants and services have broken ground, as well as more suburban housing.

The issue of land development is often hotly contested by local governments. In addition to arguments for and against development, the question of potential annexations, which remove property tax revenues from the surrounding townships while increasing the urban tax base (but also the demands on urban services) is a point of constant strife between the cities and the surrounding townships. On the other hand, the availability of higher-valued housing in areas belonging to the townships or surrounding villages, which is paid for by workers earning their money within the urban infrastructure also represents a movement of potential tax dollars from Champaign and Urbana to their dependent areas. 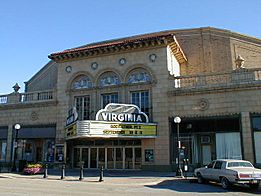 The Virginia Theatre in Downtown Champaign.

The Champaign-Urbana Metropolitan Area is home to many theatres. The University is home to three theatre venues; Foellinger Auditorium, Assembly Hall and the Krannert Center for the Performing Arts. While the Assembly Hall is primarily a campus basketball and concert arena, the Krannert Center for the Performing Arts is considered to be one of the nation's top venues for performance and hosts over 400 performances annually. Built in 1969, the Krannert Center's facilities cover over four acres (16,000 m²) of land, and features four theatres and an amphitheatre.

The Historic Virginia Theatre in downtown Champaign is a public venue owned by the city of Champaign and administered by the Champaign Park District. It is best known for hosting Roger Ebert's Film Festival which occurs annually during the last week of April. The Virginia also features a variety of performances from community theatre with the Champaign Urbana Theatre Company, to post box-office showings of popular films, current artistic films, live musical performances (both orchestral and popular), and other types of shows. First commissioned in 1921, it originally served as a venue for both film and live performances, but became primarily a movie house in the 1950s. Occasional live events were held during the 1970s and 1980s, including a live production of "Oh, Calcutta" and performances by George Benson, Stevie Ray Vaughan, Missing Persons, and the Indigo Girls. GKC Corporation closed the Virginia as a movie house on February 13, 1992, with the final regular film being Steve Martin's "Father of the Bride". The theatre once again began holding regular live performances when it was leased to local gospel singer David Wyper in 1992. The Champaign-Urbana Theatre Company was formed to perform major musicals and opened their first season with "The Music Man" that June. Control passed to the Virginia Theatre group in 1996 and the theatre became a non-profit public venue. The Champaign Park District assumed control of the facilities in 2000. Its original Wurlitzer theatre pipe organ has been maintained by Warren York since 1988 and is still played regularly.

The Art Theater in downtown Champaign began as Champaign's first theatre devoted to movies, the Park, in 1912, and is a small venue showing films not normally playing at the box office. The theatre is the only single-screen movie theatre with daily operation as a movie theatre in Champaign-Urbana. The Virginia, which hosts Roger Ebert's Annual Overlooked Film Festival, is also single-screen, but only opens for special showings and events. Rapp and Rapp's 1914 Orpheum Theatre closed in the mid-1980s and now houses a children's science museum.

The University of Illinois Willard Airport in Savoy on the south side of Champaign provides air service through American Eagle.

While greater Champaign-Urbana does not feature any professional sports teams, the University of Illinois fields many teams which compete in the Big Ten Conference. Memorial Stadium and the State Farm Center (formerly the Assembly Hall) are both located in the south-east portion of Champaign. Memorial Stadium is a football arena where the Fighting Illini football team plays, and the State Farm Center is the home of the highly successful Fighting Illini basketball team. The NFL's Chicago Bears played in Memorial Stadium for the 2002 season while Soldier Field was being modernized and refurbished.

The city of Champaign has been working with the Frontier League to create a privately owned professional baseball team. The team was scheduled to start playing in the 2009 baseball season, but was delayed in 2008 to the 2010 season at the earliest. Since then however, there has been no development on the matter.

The University of Illinois hosted the 2013 NCAA Division I Men's and Women's Tennis Championships in May at the Kahn Outdoor Tennis Complex next to the Atkins Tennis Center and Eichelberger Field just south of Florida Avenue in Urbana. The Illini Men's Tennis team won the 2003 NCAA tennis championships and is highly ranked nationally.

Since 2009, Champaign-Urbana has been the home of the Illinois Marathon.

The following people are from the Champaign–Urbana Metropolitan Area or attended the University of Illinois at Urbana–Champaign:

All content from Kiddle encyclopedia articles (including the article images and facts) can be freely used under Attribution-ShareAlike license, unless stated otherwise. Cite this article:
Champaign–Urbana metropolitan area Facts for Kids. Kiddle Encyclopedia.