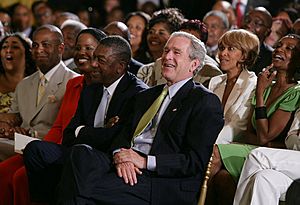 Robert Louis Johnson (born April 8, 1946 is American entrepreneur, media magnate, executive, philanthropist, and investor.He is the co-founder of BET, which was acquired by Viacom in 2001 . He is also the founder of RLJ Companies which is a holding company that invests in various business sectors .Johnson is the former majority owner of the Charlotte Bobcats.His company is listed d among the most prominent African-American businesses in the late twentieth and early twenty-first centuries

Johnson was born in 1946 in French Camp, California . His mother was a schoolteacher and his father was a farmer . Johnson graduated from the University of Illinois in 1968 with a bachelor's degree in social studies . At the University of Illinois, Johnson became a member of the Beta chapter of Kappa Alpha Psi fraternity . He received a master's degree in public affairs from the Woodrow Wilson School at Princeton University in 1972 .

All content from Kiddle encyclopedia articles (including the article images and facts) can be freely used under Attribution-ShareAlike license, unless stated otherwise. Cite this article:
Robert L. Johnson Facts for Kids. Kiddle Encyclopedia.