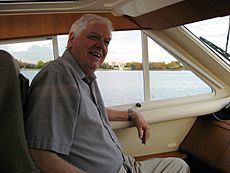 Hamilton Othanel Smith (born August 23, 1931) is an American microbiologist and a Nobel prize winner. He was jointly awarded the 1978 Nobel Prize in Physiology or Medicine. He is a leader in the field of genomics.

Hamilton Smith was, with Craig Venter, a leader in the Celera corporation's bid to analyse and sell information about the human genome. The basic idea was to find ways to make DNA sequencing cheaper so that everyone could have their DNA analysed. Then the information could be used for medical purposes.

Smith's award was for the discovery of restriction enzymes. These are enzymes that cut DNA at specific places. Such enzymes, found in bacteria and archaea, probably evolved to provide a defense mechanism against invading viruses. Inside a bacterial host, the restriction enzymes selectively cut up foreign DNA. Host DNA is modified so it does not get cut up. Together, these two processes are called the restriction modification system. To cut the DNA, a restriction enzyme makes two cuts, once through each sugar-phosphate backbone (i.e. each strand) of the DNA double helix.

All content from Kiddle encyclopedia articles (including the article images and facts) can be freely used under Attribution-ShareAlike license, unless stated otherwise. Cite this article:
Hamilton Smith Facts for Kids. Kiddle Encyclopedia.