John Bardeen (May 23, 1908 – January 30, 1991) was an American physicist and electrical engineer. He is the only person who won the Nobel Prize in Physics twice: first in 1956 with William Shockley and Walter Brattain for the invention of the transistor; and again in 1972 with Leon N Cooper and John Robert Schrieffer for a fundamental theory of conventional superconductivity known as the BCS theory.

The transistor revolutionized the electronics industry and ushered the birth of the Information Age. The semiconductor device also made possible the development of almost every modern electronic device, from telephones to computers to missiles. Bardeen's developments in superconductivity—which won him his second Nobel Prize—are used in nuclear magnetic resonance spectroscopy (NMR) or its medical sub-tool magnetic resonance imaging (MRI).

In 1990, John Bardeen appeared on LIFE Magazine's list of "100 Most Influential Americans of the Century."

In addition to winning the Nobel prize twice, Bardeen won numerous awards including:

Bardeen died of heart disease at age 82 at Brigham and Women's Hospital in Boston, Massachusetts, on January 30, 1991. Bardeen and his wife are buried in Forest Hill Cemetery, Madison, Wisconsin. They were survived by three children and six grandchildren. 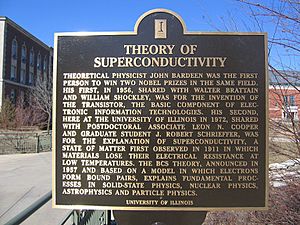 In honor of Professor Bardeen, the engineering quadrangle at the University of Illinois at Urbana-Champaign is named the Bardeen Quad.

Also in honor of Bardeen, Sony Corporation endowed a $3 million John Bardeen professorial chair at the University of Illinois at Urbana-Champaign, beginning in 1990. SONY Corporation owed much of its success to commercializing Bardeen's transistors in portable TVs and radios, and had worked with Illinois researchers. The current John Bardeen Professor is Nick Holonyak, Bardeen's doctoral student and protege.

At the time of Bardeen's death, then-University of Illinois chancellor Morton Weir said, "It is a rare person whose work changes the life of every American; John's did."

Bardeen was honored on a March 6, 2008, United States postage stamp as part of the "American Scientists" series designed by artist Victor Stabin. The $0.41 stamp was unveiled in a ceremony at the University of Illinois.

All content from Kiddle encyclopedia articles (including the article images and facts) can be freely used under Attribution-ShareAlike license, unless stated otherwise. Cite this article:
John Bardeen Facts for Kids. Kiddle Encyclopedia.