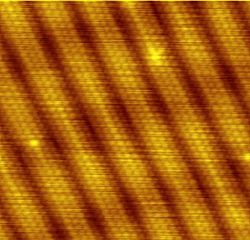 Image of reconstruction on a Gold surface.

Scanning tunneling microscopy (STM) is a way to view atoms. It was developed in 1981. It was invented by Gerd Binnig and Heinrich Rohrer at IBM Zürich. They won the Nobel Prize in Physics for inventing it in 1986. For STM, good resolution is 0.1 nm lateral resolution (how accurately it can see features on the surface) and 0.01 nm depth resolution (how accurately it can see the height of bumps on the surface). The STM can be used not only in a vacuum but also in air and various other liquids or gases, and at most common temperatures.

The STM is based on something called quantum tunneling. When a metal tip is brought very near to a metal or semiconducting surface, a voltage between the two can allow electrons to flow through the vacuum between them. Changes in current as the probe goes over the surface is what makes the picture. STM can be a hard thing to do, as it needs very clean surfaces and sharp tips.

First the tip is brought very close to the thing being looked at, about 4-7 angstroms. Then the tip is moved very carefully across the thing being tested. This change in current when it is moved can be measured (constant height mode). The height of the tip where it always has the same current can be measured, too (constant current mode). Using a constant height mode is faster. 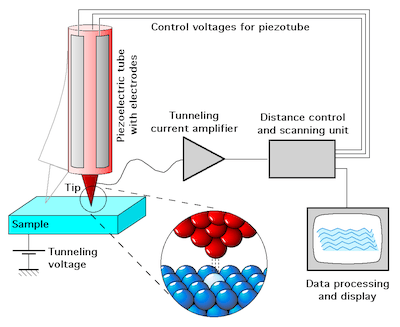 Parts of an STM 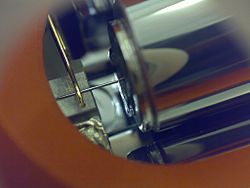 A closeup of a simple scanning tunneling microscope head at the University of St Andrews scanning MoS2 using a Platinum-Iridium stylus.

All content from Kiddle encyclopedia articles (including the article images and facts) can be freely used under Attribution-ShareAlike license, unless stated otherwise. Cite this article:
Scanning tunneling microscope Facts for Kids. Kiddle Encyclopedia.