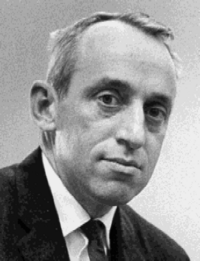 James Tobin (March 5, 1918 – March 11, 2002) was an American economist. Outside academia, Tobin became widely known for his suggestion of a tax on foreign exchange transactions, now known as the "Tobin tax". This was designed to reduce speculation on currency markets, which he saw as unproductive. He also suggested that the money gained from the tax could be used to fund projects for the benefit of Third World countries, or to support the United Nations.

Tobin's academic work included pioneering contributions to the study of investment, monetary and fiscal policy and financial markets. He promoted and developed the ideas of Keynesian economics. He believed that governments should intervene in the economy in order to stabilise output and avoid recessions.

All content from Kiddle encyclopedia articles (including the article images and facts) can be freely used under Attribution-ShareAlike license, unless stated otherwise. Cite this article:
James Tobin Facts for Kids. Kiddle Encyclopedia.