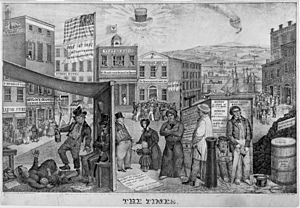 In 1837, there was an economic crisis, especially in the state of New York. This image tries to illustrate what the situation was like, with regards to fiscal policy. The image appeared in the Times, that year

The model of the economy has cycles, which usually look like the picture.

When a state uses taxes and government spending to influence the economy, this is known as fiscal policy in economics and political science. Idea from John Maynard Keynes. The state can influence the following parameters:

In general, fiscal policy is cyclic: Effects which result from changes in fiscal policy need some time until they can be observed.

Certain schools of thought think that fiscal policy should not be used to influence the economy. This is the case for Monetarism, which demands that keeping money at its value is the most important goal.

All content from Kiddle encyclopedia articles (including the article images and facts) can be freely used under Attribution-ShareAlike license, unless stated otherwise. Cite this article:
Fiscal policy Facts for Kids. Kiddle Encyclopedia.