Monticello is located in East Central Illinois between the cities of Decatur and Champaign, Illinois.

Monticello is nearly equidistant from Chicago, St. Louis, and Indianapolis.

Robert Allerton Park, which belongs to the University of Illinois at Urbana-Champaign and includes a conference center, a garden, summer camp location, and forest art museum, is located just outside Monticello. 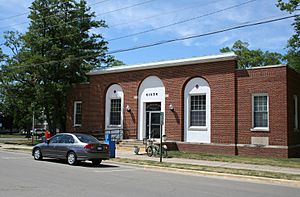 Monticello's first resident was George Haworth. Haworth came to the area in 1822 to serve as a U.S. liaison agent to local Native American tribes. Haworth did not remain, but in 1829, James A. Piatt purchased Haworth's small log cabin. Soon more settlers arrived.

In 1837, residents decided to form a new town. Abraham Marquiss, William Barnes, James McReynolds, and James A. Piatt Jr. formed a joint stock company and purchased land from James A. Piatt. Upon McReynold's suggestion, the town was christened Monticello – after the home of Thomas Jefferson. Monticello officially became a town on July 1, 1837. Townsfolk held a celebration on July 4.

The first house in the new town was built by a Mr. Cass who used the building as his home and a grocery store. The second house was a log cabin built by John Tenbrooke. In 1839, Nicholas DeVore built the "Old Fort" which was later used as a hotel. Monticello continued to grow as the population increased over the next decade.

The citizens of Monticello were unhappy with the distance required to travel to the county seat for their legal issues. Due to the petitions of George Patterson and others, a new county was established on Jan 27 1841: Piatt County – named in honor the first permanent settler, James A. Piatt. As it was the only town in the area at that time, Monticello was named the county seat. The county began legal functions on April 5, 1841 in the "Old Fort." In 1843, the first courthouse was built on land donated by William H. Piatt.

Monticello's star resident arrived in 1885. Dr. William B. Caldwell came to practice medicine in Monticello but his homemade mixture of senna and pepsin brought Monticello to a level of national prominence. The Pepsin Syrup Company was founded in 1893, and became the leading employer in the city for decades until its closure in 1985. The building in which it operated has since been demolished. The site is now used as an unofficial soccer practice field. 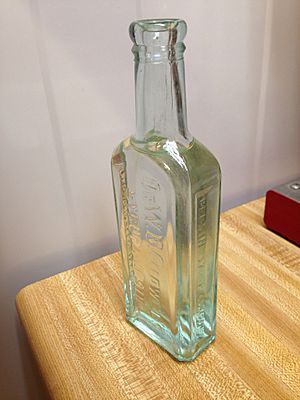 Bottle of the Syrup Pepsin Company. It reads Monticello, Illinois on the left side.

In 1987 the 150th birthday of the town was celebrated with an open air reenactment and other festivities.

The Potawatomi Trail of Death passed through here in 1838.

In a 2012 episode of the Comedy Central program The Daily Show, host Jon Stewart used the town in a joke segment, referring to it as Dogshit Bluffs.

All content from Kiddle encyclopedia articles (including the article images and facts) can be freely used under Attribution-ShareAlike license, unless stated otherwise. Cite this article:
Monticello, Illinois Facts for Kids. Kiddle Encyclopedia.