Danville is a city in and the county seat of Vermilion County, Illinois, United States. As of the 2010 census, its population was 33,027. 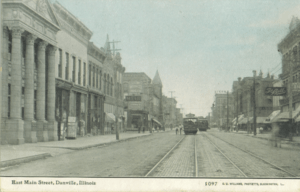 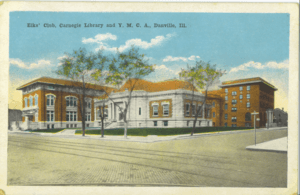 Danville was founded in 1827 on 60 acres (240,000 m2) of land donated by Guy W. Smith and 20 acres (81,000 m2) donated by Dan W. Beckwith. The sale of lots was set for April 10, 1827 and advertised in newspapers in Indianapolis, Indiana and the state capital of Vandalia. The first post office was established in May of the same year in the house of Amos Williams, organizer of Vermilion and Edgar Counties and a prominent Danville citizen. Williams and Beckwith drew up the first plat map; the city was named after Dan Beckwith at Williams' suggestion, although Beckwith suggested the names "Williamsburg" and "Williamstown". Beckwith was born in Pennsylvania in 1795 and moved to Indiana as a young man; in 1819 he accompanied the first white explorers to the area where Danville later existed because of his interest in the salt springs of the Vermilion River. He died in 1835 of pneumonia contracted on a horseback ride back from Washington; he was 40 years old. Danville became a major industrial city in the late 19th and early twentieth centuries. From the 1850s to the 1940s, Danville was an important coal mining area; some of the first open pit mining techniques were practiced here. The coal formation underlying eastern Illinois and western Indiana is named the "Danville Member," after the area where it was first discovered. With the closure of the mines and many factories, Danville's economic base suffered in the latter half of the 20th century. The former mines were converted into lakes, creating fishing and recreation opportunities at parks such as Kickapoo State Recreation Area and Kennekuk Cove County Park.

Danville is located approximately 120 miles (190 km) south of Chicago, 35 miles (56 km) east of Champaign-Urbana, and 90 miles (140 km) west of Indianapolis, Indiana. Illinois Route 1, U.S. Route 136, and U.S. Route 150 intersect in Danville; Interstate 74 passes through the south end of town. Lake Vermilion is located on the northwest side of town.

Danville is the principal city of the Danville Metropolitan Statistical Area, which encompasses all of Danville and Vermilion County.

There were 13,327 households out of which 28% had children under the age of 18 living with them, 42.0% were married couples living together, 15.1% had a female householder with no husband present, and 38.8% were non-families. 33.9% of all households were made up of individuals and 15.5% had someone living alone who was 65 years of age or older. The average household size was 2.35 and the average family size was 3.01.

The general aviation community is served by the Vermilion Regional Airport.

Danville is known as a major railroad intersection with at least four different tracks entering town from different directions, resulting in many crossings throughout the town. CSX Transportation, Norfolk Southern Railway, and Kankakee, Beaverville and Southern Railroad all operate rail lines that pass through Danville.

All content from Kiddle encyclopedia articles (including the article images and facts) can be freely used under Attribution-ShareAlike license, unless stated otherwise. Cite this article:
Danville, Illinois Facts for Kids. Kiddle Encyclopedia.