The Virginia Theatre is a live performance and movie theatre in downtown Champaign, Illinois. It has been providing theatrical and cinematic entertainment to the Champaign-Urbana community since its doors opened in 1921. Each year, the Virginia Theatre is host to movies from film reels, plays from various acting troupes, concerts, and Ebertfest, presented by the UIUC College of Media. It is currently owned by the Champaign Park District.

The Virginia Theatre opened December 28, 1921 with a live stage performance of "The Bat". The following night, the silent films Tol'able David and The Boat were shown at the theatre. Since then, it has been presenting movies, live concerts, and plays to the Champaign-Urbana community and has only been closed for short periods of renovation by the Park District. Until recently, the Virginia Theatre was privately owned. From the 1930s to the 1960s, RKO pictures held ownership. Subsequently, George Kerasotes Corporation (GKC Theatres) owned the building until it was sold to the Virginia Theater Group, a not-for-profit organization, organized for that purpose in the 1990s. The Champaign Park District purchased it in January 2000.

The theatre was added to the National Register of Historic Places in 2003, based on its historical role in providing a wide variety of entertainment to Champaign and surrounding area, particularly in the years between 1921 and 1953. Of note were theatrical productions, vaudeville, concerts, and motion pictures. Also noteworthy was the building's state of preservation and the integrity of its original early to mid 20th century roots.

A major part of the Virginia Theatre is its restoration. In December 1999, the Champaign Park District received a $900,000 grant from the State of Illinois to restore the then run-down theatre. Extensive work was done to bring the building up to current code, most of it not visible to the general public. In 2000, the curved movie screen that had been in place for decades was replaced with a smaller screen (50-foot wide viewable image) which can be flown offstage. Additional restrooms were completed in 2001. Box office renovation, dressing room remodeling, and carpet replacement took place in 2002-2003. The east lobby/storefront was remodeled during 2007, and the main lobbies and concession stand were renovated and redecorated in 2010, thanks to a considerable donation from Michael Carragher. The decaying 1930s-era neon marquee was removed from the theatre on November 16, 2010, and it was replaced with a newly designed marquee in September 2011, in spite of opposition from many community members and historic preservation advocates.

In 1921, the Rudolph Wurlitzer Company installed a theatre organ to provide musical accompaniment for silent films. That 2/8 (two keyboard, eight ranks of pipes) instrument was removed by Buzard Pipe Organ Builders of Champaign in December 2010 for renovation, and it was reinstalled in the Fall of 2011.

The Virginia Theatre hosts a wide variety of events throughout the year. One weekend a month, classic movies are played on a 56-foot wide screen. These movies range from 1940s movies such as White Christmas to cult favorites like The Big Lebowski. Tickets to each of two screenings are 5 dollars and there is also a raffle to win a DVD of the movie being played. Some months have themes reflecting the holidays, such as Christmas, Valentine's Day, and Halloween. There is also College and Kids night. Beginning a few years ago, the Champaign Park District began hosting "Reel Deals" at the Virginia Theatre. Showing newer releases, Reel Deals are shown for $3 on Tuesdays and Thursdays on an irregular schedule. From 1992 until 2010, the Champaign-Urbana Theatre Company, or CUTC, performed plays at the theatre. CUTC once again performs shows starting in 2016. 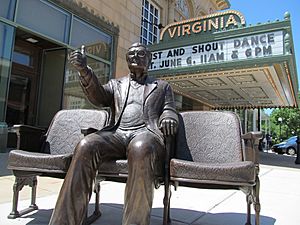 A statue of Roger Ebert giving his "thumbs up" outside the Virginia Theater.

Following Ebert's death in 2013, organizers in Champaign announced plans to raise $125,000 to build a life-size bronze statue of Ebert in the town. The composition was selected by Ebert's wife Chaz and depicts him sitting in the middle of three theater seats giving his trademark "thumbs up" gesture. The sculpture was unveiled at the 2014 Ebertfest, and sits directly outside the theater.

All content from Kiddle encyclopedia articles (including the article images and facts) can be freely used under Attribution-ShareAlike license, unless stated otherwise. Cite this article:
Virginia Theatre (Champaign) Facts for Kids. Kiddle Encyclopedia.