The Embarras River ( EM-brah) is a 195-mile-long (314 km) tributary of the Wabash River in southeastern Illinois in the United States. The waters of the Embarras reach the Gulf of Mexico via the Wabash, Ohio, and Mississippi Rivers. The river drains a watershed around 1,566,450 acres (6,339.2 km2) in an agricultural region. The name comes from French explorers, who used the term embarras for river obstacles, blockages, and difficulties relating to logjams and the like. 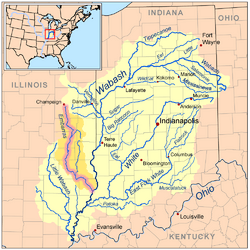 Map of the Embarras River highlighted within the Wabash River watershed

The Embarras River rises in Champaign County. The upper reaches of the Embarras include the detention ponds near the intersection of Windsor Road with U.S. Route 45 in southeastern Champaign; the southern portion of the University of Illinois campus, including the small creek near the Vet Med Building; and Meadowbrook Park in south Urbana.

The Embarras flows generally southward through Douglas, Coles, Cumberland, and Jasper Counties. In Jasper County, it turns southeast for the remainder of its course through Richland, Crawford, and Lawrence Counties. In Coles County, a dam helps create Lake Charleston. Portions of the river's lower course have been straightened and channelized. It joins the Wabash River 6 miles (10 km) southwest of Vincennes, Indiana.

Along its course, the Embarras passes the towns of Villa Grove, Camargo, Charleston, Greenup, Newton, Ste. Marie, and Lawrenceville.

The United States Board on Geographic Names settled on "Embarras River" as the stream's official name in 1964. According to the Geographic Names Information System, it has also been known as the "Ambraw River" and as the "Embarrass River."

The only population of harlequin darters (Etheostoma histrio) in Illinois is found in the Embarras River.

In the 18th century, the Embarras River was part of the trail from Cahokia to Vincennes. The river route was used by George Rogers Clark's forces during the Illinois Campaign.

All content from Kiddle encyclopedia articles (including the article images and facts) can be freely used under Attribution-ShareAlike license, unless stated otherwise. Cite this article:
Embarras River (Illinois) Facts for Kids. Kiddle Encyclopedia.