Villa Grove is a city in Douglas County, Illinois, along the Embarras River. The population was 2,537 at the 2010 census.

Villa Grove was chartered in 1903 after the area was recognized by the Chicago and Eastern Illinois Railroad (C&EI) as being exactly halfway between Chicago and St. Louis. This made it a desirable location for a steam locomotive repair facility. Villa Grove later became the site of a C&EI division headquarters and roundhouse. Villa Grove was also known for its Pancake Festivals in the 1940s, which drew crowds over 10,000. In the 1970s, the festival was replaced by the Ag Days celebration. In 1923, Villa Grove's high school basketball team, the Blue Devils, defeated Rockford 32-29 to win the Illinois High School Boys Basketball Championship.

Villa Grove's historic rail depot was demolished in the predawn hours of Friday, October 29, 1976 despite a city ordinance that was intended to protect the structure. The city later received reparation for the destruction.

On August 10, 2011, a 100-year-old vacant building on main street in Villa Grove was destroyed by a fire set by a two boys age 14 and 9. At least 15 fire departments responded to the blaze containing it to the original structure. The boys were ordered to pay $126,076 in restitution. The 14-year-old received 3 years probation, 30 days in jail and 100 hours of community service. The 9 year old received 2 years probation and 50 hours community service. State law prohibited jail time for the 9 year old. Adjacent businesses were temporarily displaced due to damage caused by smoke and heat.

Villa Grove's location at the confluence of Jordan Slough and the Embarras River has resulted in flooding during the city's history. In January 1950, Villa Grove was isolated by flooding, more than 1/3 of the city was underwater and the Red Cross reported 100 families were homeless. Another flood in April 1994 left over half of the city's 1,000 homes flooded and the city's water supply was tainted. At one point, portions of main street were 6 feet underwater.

After the severe flooding in 1994 and additional flooding in the following years, a program was implemented to purchase and demolish homes voluntarily from owners in the flood plain. The Federal Emergency Management Agency (FEMA) and the Illinois Emergency Management Agency (IEMA) used the Hazard Mitigation Grant Program (HMGP) to purchase 17 homes in two phases from 1995 to 2000. IEMA noted that when another flood occurred in June 2008, the 17 properties purchased would have again been flooded had they not been purchased and demolished. Additional plans were also made to purchase more flood prone properties after the 2008 flood. After flooding in April 2013, FEMA again provided funding to purchase and demolish eight more homes and one public building in Villa Grove under HMGP. 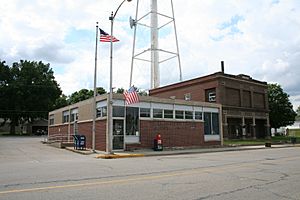 There were 1,033 households out of which 33.8% had children under the age of 18 living with them, 54.4% were married couples living together, 10.7% had a female householder with no husband present, and 29.6% were non-families. 26.4% of all households were made up of individuals and 13.6% had someone living alone who was 65 years of age or older. The average household size was 2.46 and the average family size was 2.93.

All content from Kiddle encyclopedia articles (including the article images and facts) can be freely used under Attribution-ShareAlike license, unless stated otherwise. Cite this article:
Villa Grove, Illinois Facts for Kids. Kiddle Encyclopedia.