Charleston is a city in and the county seat of Coles County, Illinois, United States. The population was 17,286, as of the 2020 census. The city is home to Eastern Illinois University and has close ties with its neighbor, Mattoon. Both are principal cities of the Charleston–Mattoon Micropolitan Statistical Area. 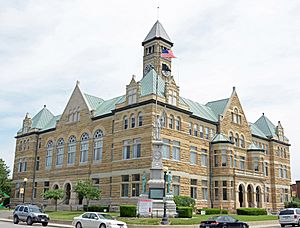 Native Americans lived in the Charleston area for thousands of years before Europeans arrived. With the great tallgrass prairie to the west, beech-maple forests to the east, and the Embarras River and Wabash Rivers between, the Charleston area provided semi-nomadic Native Americans access to a variety of resources. Indians may have deliberately set the "wildfires" which maintained the local mosaic of prairie and oak–hickory forest. Streams with names like Indian Creek and Kickapoo Creek mark the sites of former Native settlements. One village is said to have been located south of Fox Ridge State Park near a deposit of flint.

The early history of European settlement in the area was marked by uneasy co-existence between Native Americans and European settlers. Some settlers lived peacefully with the natives. But in the 1810s and 1820s, after Native Americans allegedly harassed surveying crews, an escalating series of poorly documented skirmishes occurred between Native Americans, settlers, and militias known as the Illinois Rangers. Two pitched battles (complete with cannon on one side) occurred just south of Charleston along "the hills of the Embarrass," near the entrance to modern Lake Charleston park. These conflicts did not slow European settlement. Native American history in Coles County effectively ended when all natives were expelled by law from Illinois after the 1832 Black Hawk War. With the grudging exception of Indian wives, the last natives were driven out by the 1840s.

First settled by Benjamin Parker in 1826, it was named for Charles Morton, its first postmaster. The city was established in 1831, but not incorporated until 1865. When Abraham Lincoln's father moved to a farm on Goosenest Prairie south of Charleston in 1831, Lincoln helped him move, then left to start his own homestead at New Salem in Sangamon County. Lincoln was a frequent visitor to the Charleston area, though he likely spent more time at the Coles County courthouse than at the home of his father and stepmother. One of the famous Lincoln-Douglas debates was held in Charleston on September 18, 1858, and is now the site of the Coles County fairgrounds and a small museum. Lincoln's last visit was in 1859, when the future President visited his stepmother and his father's grave.

Although Illinois was a solidly pro-Union, anti-slavery state, Coles County was settled by many Southerners with pro-slavery sentiments. In 1847, the county was divided when prominent local citizens offered refuge to a family of escaped slaves brought from Kentucky by Gen. Robert Matson. Abe Lincoln, by then a young railroad lawyer, appeared in the Coles County courthouse to argue for the return of the escaped slaves under the Fugitive Slave Act in a case known as Matson v. Ashmore. As in the rest of the nation, this long-simmering debate finally broke out into violence during the American Civil War. On March 28, 1864 a riot—or perhaps a small battle—erupted in downtown Charleston when armed Confederate sympathizers known as Copperheads arrived in town to attack half-drunk Union soldiers preparing to return to their regiment. Newspaper accounts at the time said the Copperheads stated intention was to burn the town and "cut out the hearts of the '[damned] abolitionists.'" Even the county sheriff is alleged to have fired on the soldiers. By the time the Charleston Riot had ended, nine were dead and twelve had been wounded, mostly Copperheads.

In 1895, the Eastern Illinois State Normal School was established in Charleston, which later became Eastern Illinois University. This led to lasting resentment in nearby Mattoon, which had originally led the campaign to locate the proposed teaching school in Coles County. A Mattoon newspaper printed a special edition announcing the decision with the derisive headline "Catfish Town Gets It."

Thomas Lincoln's log cabin has been restored and is open to the public as the Lincoln Log Cabin State Historic Site, 8 mi. south of Charleston. The Lincoln farm is maintained as a living history museum where historical re-enactors depict life in 1840s Illinois. Thomas and Sarah Bush Lincoln are buried in the nearby Shiloh Cemetery.

On May 26, 1917, a deadly tornado ripped through Charleston, killing 38 and wounding many more along with destroying 220 homes.

There were 7,972 households, out of which 20.2% had children under the age of 18 living with them, 33.9% were married couples living together, 7.3% had a female householder with no husband present, and 56.6% were non-families. 34.6% of all households were made up of individuals, and 9.5% had someone living alone who was 65 years of age or older. The average household size was 1.75 and the average family size was 2.44.

The establishment of an enterprise zone on the northern edge of Charleston has helped attract some manufacturing and industrial jobs, including Vesuvius USA, ITW Hi-Cone, and Dietzgen Corporation. 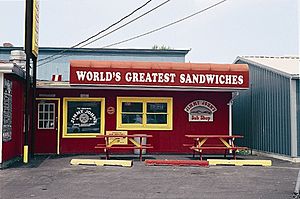 Jimmy John Liautaud founded the first Jimmy John's restaurant in Charleston in 1983, occupying premises near the corner of Fourth Street and Lincoln Avenue.

Eastern Illinois University is a public university in Charleston and has served the community since 1895.

Lakeview College of Nursing has a campus located in Charleston.

Charleston is served by the Coles County Memorial Airport (MTO), which is approximately 6 miles (9.7 km) west of Charleston. Established in 1953, the airport received commercial service until 2000, and now serves as a public general aviation facility.

Charleston is serviced by two main transit routes: the Charleston Zip Line ran by Dial-A-Ride which services the general city area, and the Panther Shuttle, which mainly services the Eastern Illinois University campus. The Zip Line has been suspended until further notice due to COVID-19.

Charleston is serviced by the Sarah Bush Lincoln Health Center, whose main campus is approximately 6 miles (9.7 km) west of Charleston. There is a Walk-In Clinic located within the city itself.

All content from Kiddle encyclopedia articles (including the article images and facts) can be freely used under Attribution-ShareAlike license, unless stated otherwise. Cite this article:
Charleston, Illinois Facts for Kids. Kiddle Encyclopedia.