Crawford County is a county located in the U.S. state of Illinois. As of the 2010 census, the population was 19,817. Its county seat is Robinson.

Crawford County was formed in Illinois Territory on December 31, 1816 out of Edwards County. At the time of its formation, it encompassed about one third of the State, but it was reduced to its present borders by 1831 as it spawned new counties. It was named in honor of William H. Crawford, from Georgia, who was serving as Secretary of War and Secretary of the Treasury at the time. Crawford County was home to several battles between the settlers and Indians, and also the location of the only woman ever hanged in Illinois.

In 1818, the town of Palestine was designated as the county seat. After elections in 1843, a new site was chosen, which would become the town of Robinson. 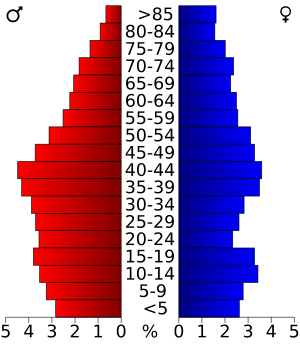 All content from Kiddle encyclopedia articles (including the article images and facts) can be freely used under Attribution-ShareAlike license, unless stated otherwise. Cite this article:
Crawford County, Illinois Facts for Kids. Kiddle Encyclopedia.