The Elk River is a tributary of the Kanawha River, 172 miles (277 km) long, in central West Virginia in the United States. Via the Kanawha and Ohio rivers, it is part of the watershed of the Mississippi River.

The Elk is formed in the Allegheny Mountains in Pocahontas County by the confluence of two short streams, the Big Spring Fork and the Old Field Fork, which join near the community of Slatyfork. It flows above ground for several miles before it sinks into a network of caverns and flows underground for more than five miles. The old riverbed of solid rock, however, remains above ground in this section known as "The Dries." It follows a generally westward course across the unglaciated Allegheny Plateau, through Randolph, Webster, Braxton, Clay, and Kanawha Counties, past the towns of Webster Springs, Sutton, Gassaway, Clay, Clendenin, and Elkview before joining the Kanawha River at Charleston.

The Elk's largest tributaries are the Holly River and the Birch River, both of which join it in Braxton County.

Below Sutton Lake, is a high-gradient warmwater fishery well known for its muskellunge, walleye and smallmouth bass fishing. The Elk River serves as the source of water for 1500 miles of pipeline that carry its water to customers in central and southwestern West Virginia.

The river's name most likely comes from the Native Americans of the area, who saw great numbers of elk near the stream.

According to the Geographic Names Information System, the Elk River has also been known historically as: 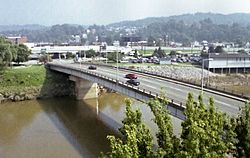 The Elk River near its mouth in Charleston in 2001

In January 2014 a spill of the chemical 4-methylcyclohexane methanol, a foaming agent used as a wash component in the coal-preparation process, required West Virginia authorities to supply water to as many as 300,000 people in nine of the state's counties. The effect of the Elk River chemical spill to the critically endangered diamond darter fish, known only to live in the Elk River, is still unknown.

All content from Kiddle encyclopedia articles (including the article images and facts) can be freely used under Attribution-ShareAlike license, unless stated otherwise. Cite this article:
Elk River (West Virginia) Facts for Kids. Kiddle Encyclopedia.