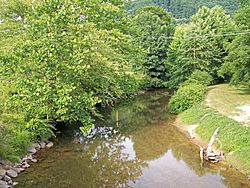 The Birch River is a tributary of the Elk River in rural central West Virginia in the United States, on the unglaciated Allegheny Plateau. It rises near the town of Cowen in western Webster County, and flows generally WNW through northern Nicholas County and southern Braxton County, where it joins the Elk. Tributaries are Millcreek, Polemic Creek, and Skyles Creek.

The river most likely was named after birch trees lining its banks.

The Little Birch River is a tributary of the Birch. It rises in western Webster County and flows generally westward through southern Braxton County.

All content from Kiddle encyclopedia articles (including the article images and facts) can be freely used under Attribution-ShareAlike license, unless stated otherwise. Cite this article:
Birch River (West Virginia) Facts for Kids. Kiddle Encyclopedia.