The diamond darter (Crystallaria cincotta) is a species of freshwater ray-finned fish, a darter from the subfamily Etheostomatinae, part of the family Percidae, which also contains the perches, ruffes and pikeperches. It is named for the sparkling light it reflects during nighttime collections. The diamond darter was first described in 2008 and is only the second known member of its genus, which also includes the crystal darter, C. asprella. On July 26, 2013, the United States Fish and Wildlife Service formally designated the diamond darter as an endangered species under the Endangered Species Act of 1973. 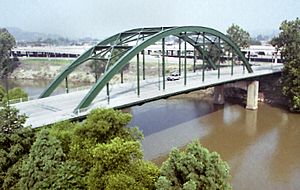 The diamond darter was originally collected from areas of the Elk River, seen here from Charleston, West Virginia

The diamond darter was described from specimens collected from the drainages of the Cumberland, Elk, Green, and Muskingum Rivers, which are all part of the Ohio River basin, from 1980 to 2005. Because of river alterations, and problems with water quality, the diamond darter's range has become greatly diminished. As of 2008, the fish is only known to still live in the Elk River, West Virginia. The effect of the 2014 Elk River chemical spill to the diamond darter is still unknown.

All content from Kiddle encyclopedia articles (including the article images and facts) can be freely used under Attribution-ShareAlike license, unless stated otherwise. Cite this article:
Diamond darter Facts for Kids. Kiddle Encyclopedia.