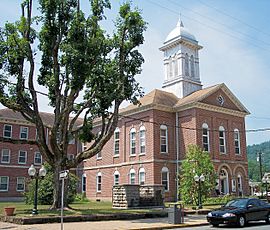 The Braxton County Courthouse in 2007

Sutton is a town in Braxton County, West Virginia, in the United States. The population was 994 at the 2010 census. It is the county seat of Braxton County. Sutton is situated at a center of transportation in West Virginia. Interstate 79, a major north-south route, connects with Appalachian Corridor L (U.S. Route 19), another significant north-south route, just a few miles south of town.

Sutton was settled in 1792 by Adam O'Brien, from Bath County, Virginia. In 1809, John D. Sutton settled at the confluence of Granny's Creek and the Elk River, at the edge of the present town. The village of Suttonville, formerly known as Newville, was laid out in 1835. When Braxton County was formed in 1836, the first court was held in the home of John D. Sutton.

Sutton was a transportation hub. In addition to the navigable Elk River, the Weston and Gauley Bridge Turnpike connected the Staunton and Parkersburg Turnpike to the James River and Kanawha Turnpike, via Sutton. A suspension bridge was constructed on the Weston and Gauley Bridge Turnpike across the Elk River at Sutton in 1853. Railroads also served the town of Sutton, with the Sutton Branch connecting to the West Virginia and Pittsburgh Railroad at Flatwoods, West Virginia via McNutt (near the area now called Laurel Court), a path that would later be used by West Virginia State Route 4. Another branch that ran along the southeastern bank of the Elk River joined the Coal and Coke Railway six miles to the east at Gassaway.

Due to its location, Sutton was embroiled in the American Civil War. On September 5, 1861, the town was occupied by 5,000 Union troops. Later in 1861, General William Rosecrans bivouacked 10,000 Union troops there, including future President William McKinley. On December 29, 1861, Confederate soldiers burned most of the downtown.

Sutton slowly rebuilt but remained small until the local timber industry boomed. The town then became a commercial center, and many of the banks, hotels, shops, and other historic buildings in the Sutton Downtown Historic District date from this 1890–1920 period. After this, Sutton once again slowed in development. Sutton Dam was built on the Elk River upstream from the town in 1961, adding a tourism component to the local economy.

The William Edgar Haymond House and Old Sutton High School are listed on the National Register of Historic Places, along with the historic district.

The Sutton Lake project was authorized by Congress in the Flood Control Act of 1938. Construction began in October 1949, but was interrupted by the Korean War. Work restarted in 1956 and in the dam was finally completed in 1961. The Dam and lake provide opportunities for boating, picnicing, playgrounds, camping and pavilions available for rent. A handicap-access fishing area was also recently constructed at the Sutton Dam.

There were 452 households of which 23.2% had children under the age of 18 living with them, 41.2% were married couples living together, 11.3% had a female householder with no husband present, 6.2% had a male householder with no wife present, and 41.4% were non-families. 34.3% of all households were made up of individuals and 13.2% had someone living alone who was 65 years of age or older. The average household size was 2.18 and the average family size was 2.78.

There were 470 households out of which 22.1% had children under the age of 18 living with them, 43.0% were married couples living together, 13.6% had a female householder with no husband present, and 39.6% were non-families. 34.9% of all households were made up of individuals and 15.7% had someone living alone who was 65 years of age or older. The average household size was 2.14 and the average family size was 2.69.

Sutton, and the surrounding area, was the setting for a short science fiction story by Lawrence Watt-Evans entitled Why I Left Harry's All-Night Hamburgers. It was nominated for the Nebula Award in 1987 and won the Hugo Award for Best Short Story in 1988. In 1991, a sequel, "A Flying Saucer with Minnesota Plates" was published. It also takes place around Sutton.

All content from Kiddle encyclopedia articles (including the article images and facts) can be freely used under Attribution-ShareAlike license, unless stated otherwise. Cite this article:
Sutton, West Virginia Facts for Kids. Kiddle Encyclopedia.