A moose (Alces alces; called elk in Europe) is a large deer. Some authorities put the American moose in a different species, Alces americanus.

Moose live in northern Europe, Asia, and in North America. Moose usually live in areas with lakes, marshes and swamps. They also live in mountain ranges. 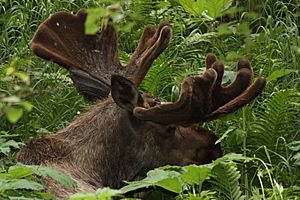 Bull moose have antlers like other members of the deer family. Cows select mates based on antler size. Bull moose use dominant displays of antlers to discourage competition and will spar or fight rivals. The size and growth rate of antlers is determined by diet and age; symmetry reflects health.

The male's antlers grow as cylindrical beams projecting on each side of the head at right angles to the midline of the skull, and then fork. The lower prong of this fork may be either simple, or divided into two or three tines, with some flattening.

Antler beam diameter, not the number of tines, indicates age. 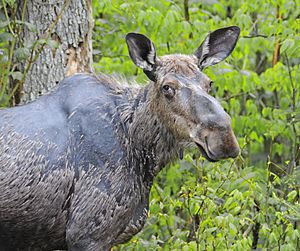 Young female (A. a. americana) in early June.

After the mating season males drop their antlers to conserve energy for the winter. A new set of antlers will then regrow in the spring. Antlers take three to five months to fully develop, making them one of the fastest growing animal organs.

Antler growth is "nourished by an extensive system of blood vessels in the skin covering, which contains numerous hair follicles that give it a 'velvet' texture." This requires intense grazing on a highly-nutritious diet. By September the velvet is removed by rubbing and thrashing which changes the colour of the antlers. Immature bulls may not shed their antlers for the winter, but retain them until the following spring.

Birds, carnivores and rodents eat dropped antlers as they are full of protein and moose themselves will eat antler velvet for the nutrients.

Their fur consist of two layers; top layer of long guard hairs and a soft wooly undercoat. The guard hairs are hollow and filled with air for better insulation, which also helps them stay afloat when swimming.

Both male and female moose have a dewlap or bell, which is a fold of skin under the chin. Its exact use is unknown, but theories state that it might be used in mating, as a visual and olfactory signal, or as a dominance signal by males, as are the antlers. 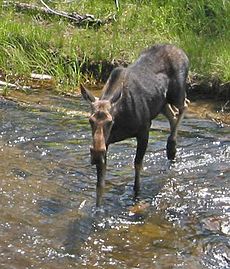 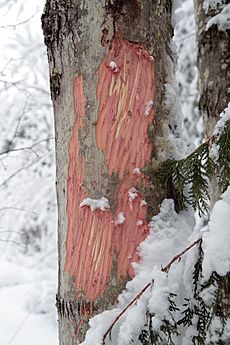 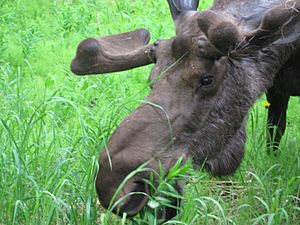 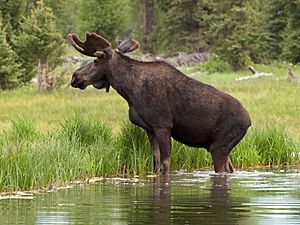 The moose is a herbivore and is capable of consuming many types of plant or fruit. The average adult moose needs to consume 9,770 kcal (40.9 MJ) per day to maintain its body weight. Much of a moose's energy is derived from terrestrial vegetation, mainly consisting of forbs and other non-grasses, and fresh shoots from trees such as willow and birch. These plants are rather low in sodium, and moose generally need to consume a good quantity of aquatic plants. While much lower in energy, aquatic plants provide the moose with its sodium requirements, and as much as half of their diet usually consists of aquatic plant life. In winter, moose are often drawn to roadways, to lick salt that is used as a snow and ice melter. A typical moose, weighing 360 kg (794 lb), can eat up to 32 kg (71 lb) of food per day.

Moose lack upper front teeth, but have eight sharp incisors on the lower jaw. They also have a tough tongue, lips and gums, which aid in the eating of woody vegetation.

A moose's diet often depends on its location, but they seem to prefer the new growths from deciduous trees with a high sugar content, such as white birch, trembling aspen and striped maple, among many others.

To reach high branches, a moose may bend small saplings down, using its prehensile lip, mouth or body. For larger trees a moose may stand erect and walk upright on its hind legs, allowing it to reach branches up to 4.26 meters (14.0 ft) or higher above the ground.

Moose also eat many aquatic plants, including lilies and pondweed. Moose are excellent swimmers and are known to wade into water to eat aquatic plants. As an adaptation for feeding on plants underwater, the nose is equipped with fatty pads and muscles that close the nostrils when exposed to water pressure, preventing water from entering the nose. Other species can pluck plants from the water too, but these need to raise their heads in order to swallow.

This fenced in area is part of a long-term research project to examine the effects of moose browsing on plant biodiversity.

Moose are not grazing animals but browsers (concentrate selectors). Like giraffes, moose carefully select foods with less fiber and more concentrations of nutrients. Thus, the moose's digestive system has evolved to accommodate this relatively low-fiber diet.

Unlike most hooved, domesticated animals (ruminants), moose cannot digest hay, and feeding it to a moose can be fatal. 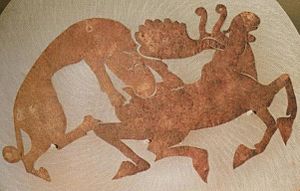 Iron Age saddle from Siberia, depicting a moose being hunted by a Siberian tiger.

A full-grown moose has few natural enemies. Siberian tigers prey on adult moose. Wolves also pose a threat, especially to females with calves. Brown bears are known to prey on moose, although bears are more likely to take over a wolf kill or to take young moose than to hunt adult moose on their own. American black bears and cougars can take moose calves and can sometimes kill adult cows. Wolverine are most likely to eat moose as carrion but have killed moose, including adults, when the moose are weakened by harsh winter conditions. Killer whales are the moose's only known marine predator. They have been known to prey on moose swimming between islands off North America's northwest coast.

Moose have been hunted by humans since the Stone Age.

Because of their dark coloured fur, moose are hard to see when they are crossing roads at night. They are sometimes hit by cars. In some countries like Canada, Finland and Sweden there are moose warning signs on roads and motorways are fenced.

Moose are mostly diurnal. They are generally solitary with the strongest bonds between mother and calf. Although moose rarely gather in groups, there may be several in close proximity during the mating season.

Mating occurs in September and October. The males are polygamous and will seek several females to breed with. During this time both sexes will call to each other. Males produce heavy grunting sounds that can be heard from up to 500 meters away, while females produce wail-like sounds. Males will fight for access to females. Initially, the males assess which of them is dominant and one bull may retreat, however, the interaction can escalate to a fight using their antlers.

Female moose have an eight-month gestation period, usually bearing one calf, or twins if food is plentiful, in May or June. Twinning can run as high as 30% to 40% with good nutrition Newborn moose have fur with a reddish hue in contrast to the brown appearance of an adult. The young will stay with the mother until just before the next young are born. The life span of an average moose is about 15–25 years. Moose populations are stable at 25 calves for every 100 cows at 1 year of age. With availability of adequate nutrition, mild weather, and low predation, moose have a huge potential for population expansion.

All content from Kiddle encyclopedia articles (including the article images and facts) can be freely used under Attribution-ShareAlike license, unless stated otherwise. Cite this article:
Moose Facts for Kids. Kiddle Encyclopedia.