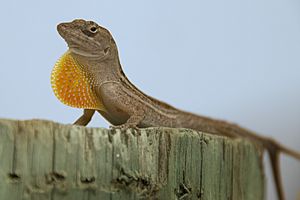 A lizard with a dewlap

A dewlap is a flap of skin that hangs beneath the neck of many animals. It can also be used to mean other things such as a double chin on a person or the vocal sac of a frog. The term dewlap can also be used to mean a caruncle, defined as "a small, fleshy excrescence that is a normal part of an animal's anatomy". At times the appearance of a dewlap indicates a stage in an animal's development. For example, the appearance of a dewlap on a female rabbit indicates she is of breeding age.

All content from Kiddle encyclopedia articles (including the article images and facts) can be freely used under Attribution-ShareAlike license, unless stated otherwise. Cite this article:
Dewlap Facts for Kids. Kiddle Encyclopedia.