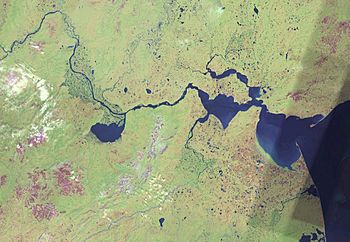 The lower Anadyr showing the Anadyrskiy Liman, the sand bar, and tributaries. The Gulf of Anadyr is partially shown to the right

Anadyrskiy Liman (Russian: Анадырский Лиман) or Anadyr Estuary is an estuary on the Gulf of Anadyr in Chukotka Autonomous Okrug, Siberia, Russian Federation.

Anadyrskiy Liman is divided into three parts. The outer bay receives the Tretya River (its mouth is the notch on the south shore). The southern part of the outer bay is shallow. The inner bay is called Onemen Bay and receives the Velikaya through a narrow bay on the southwest. They are separated by a promontory, with the town of Anadyr at its tip. North of the promontory is a series of lakes which form the mouth of the Kanchalan River. The Anadyr River enters the inner bay from the west. The lake south of the Anadyr in this image is Lake Krasnoye.

All content from Kiddle encyclopedia articles (including the article images and facts) can be freely used under Attribution-ShareAlike license, unless stated otherwise. Cite this article:
Anadyrsky Liman Facts for Kids. Kiddle Encyclopedia.