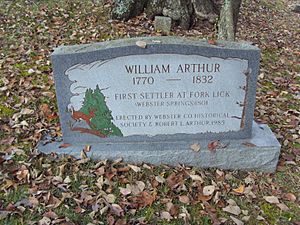 The tombstone erected near the actual burial site of William Arthur, in his honor as a founder of Fort Lick (now Webster Springs), WV. 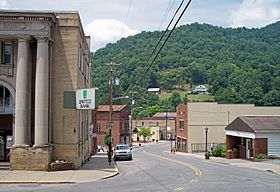 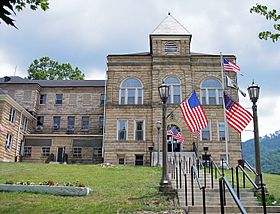 Front of the Webster County Courthouse in 2007

Webster Springs is a town in Webster County, West Virginia, United States. Although it was incorporated as Addison in 1892, it is more frequently referred to as Webster Springs, the name of the town's post office. It was named as such for Addison McLaughlin, upon whose land the town was originally laid out. The population was 776 at the 2010 census.

The town was famous in the late 19th and early 20th centuries for its numerous salt sulfur water wells. People believed that the water from the wells had medicinal qualities. The town also hosts the annual Webster County Wood Chopping Festival, a weekend-long competition in which lumberjacks from all over the world compete. The festival lasts from mid-week the week leading up to Memorial Day until the Sunday of Memorial Day weekend, when the festival ends with a fireworks display. Additional events and festivals include Webster Wildwater Weekend, which is held the first weekend in April. Canoe and kayak racers from West Virginia and surrounding states participate in the annual event. Another annual event is the Burgoo Cook-off which recognizes the best wild game stew and apple pie. $500 first place award for the best stew. The Burgoo-Cook-off also boasts an annual best scarecrow competition and pumpkin painting for the children. This event is held over the Columbus Day weekend in October. Webster Springs is also known for the great trout fishing on the Elk and Back Fork of the Elk rivers. Both native and stock trout are found in the waters and their tributaries.

The town of Webster Springs sets at the confluence of the Elk and Back Fork of the Elk Rivers. The town is the county seat of Webster county and has one hospital and a bank. The town has numerous shops, retail stores, grocery stores, pharmacies, a motel, and several restaurants. Government offices for the municipality, county, and state are available in the town. The town is served by the Addison Public Library and fire service is provided by the Webster Springs Volunteer Fire Department.

The town's first permanent settlers were named William and Polly, (maiden name, "Friend"), Arthur, who arrived in 1860. The first post office established in Webster County was Fort Lick, present-day Webster Springs. The postmaster at the time was a man by the name of John Hall.

The Morton House was listed on the National Register of Historic Places in 1986.

Hall, along with a man whose first name is not known, who is only known as Mr. Skidmore, drilled the first salt sulfur well in the county, it was known as "Old Spring." The well was later owned by Colonel John T. McGraw. The salt sulfur well helped make Webster Springs a popular summer tourist location during the 19th and early 20th Century.

According to Springs in West Virginia, the town of Webster Springs had four total springs, they included: the Addison McLaughlin Well, located to the west of Court Square on the present site of the Mineral Springs Motel, Old Fork Lick Spring, located in the bed of the Elk River, Tracy Well, located on the lot of its owner, W.B. Tracy, in Webster Springs, and the Wm. Smith Well, located in Dorrtown. The wells were popular because people believed that the water from the wells had medicinal qualities. The water was used to treat skin conditions such as psoriasis, eczema, acne and arthritis.

In 1897, Senator Johnson Newlon Camden had built a 265-room hotel of Victorian style architecture, which was larger than The Greenbrier Hotel built in 1913, which only has 250 rooms, named the Webster Springs Hotel. The hotel contained a tennis court, horse stables, garden, bowling alley, power plant, and Russian and Turkish baths, where visitors could enjoy the "medicinal" qualities of its salt sulfur waters. The hotel was also the largest wood frame hotel in West Virginia.

When first built, the hotel was a three-story dark colored building. After it was completed, construction began on a new, much larger section of the hotel, adding more rooms, and a new exterior color, white. The new section of the hotel contained up-to-date Turkish bath equipment, where guests could have a sulfur water bath. For many years, filled to capacity by guests and a greatly increased overflow which necessitated the building of smaller hotels in the town. The hotel also raised its own cattle and provided some of its own food and milk. The hotel's ice house, according to Elizah Hedding Gillespie, His Ancestors, Descendants and Their Families, was capable of holding 150 tons of ice. The hotel was heated by steam.

In 1903, Colonel McGraw purchased the hotel and expanded it by 115 rooms, completed in the spring of 1904. Of the 89 "non-guest" rooms in the new section, 40 were for salt sulfur baths, which took up the entire first floor of one wing. The entire southern wing of the hotel was given to bath rooms, including; "the plunge," Turkish, Russian, Needle, Shower, and Steam baths. Of which they were offered in both fresh and salt-sulfur water.

On the interior, it contained stuffed bears, elks, and other wildlife of the local county in realistic poses.

On the night of July 20, 1925, the hotel caught fire and was burned to the ground, being completely destroyed. Flames could be seen as far as one mile away, as well, the sky was seen as a bright red color, up to 19 miles away, in Camden-on-Gauley.

The climate in this area has mild differences between highs and lows, and there is adequate rainfall year-round. According to the Köppen Climate Classification system, Webster Springs has a marine west coast climate, abbreviated "Cfb" on climate maps.

There were 363 households of which 27.0% had children under the age of 18 living with them, 40.8% were married couples living together, 13.2% had a female householder with no husband present, 4.1% had a male householder with no wife present, and 41.9% were non-families. 36.9% of all households were made up of individuals and 14% had someone living alone who was 65 years of age or older. The average household size was 2.14 and the average family size was 2.77.

All content from Kiddle encyclopedia articles (including the article images and facts) can be freely used under Attribution-ShareAlike license, unless stated otherwise. Cite this article:
Webster Springs, West Virginia Facts for Kids. Kiddle Encyclopedia.