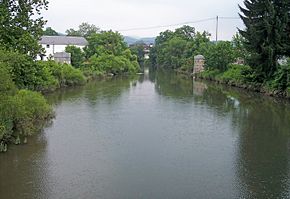 The Tygart Valley River in Elkins in 2006 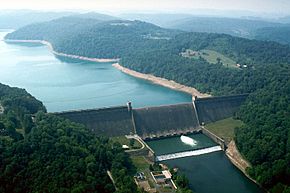 Tygart River Lake and Dam near Grafton, West Virginia. View is upriver to the south.

The Tygart Valley River — also known as the Tygart River — is a principal tributary of the Monongahela River, approximately 135 miles (217 km) long, in east-central West Virginia in the United States. Via the Monongahela and Ohio rivers, it is part of the watershed of the Mississippi River, draining an area of 1,329 square miles (3,440 km2) in the Allegheny Mountains and the unglaciated portion of the Allegheny Plateau.

The Tygart Valley River rises in the Allegheny Mountains in Pocahontas County and flows generally north-northwestwardly through Randolph, Barbour, Taylor and Marion counties, past the towns of Huttonsville, Mill Creek, Beverly, Elkins, Junior, Belington, Philippi, Arden, and Grafton, to Fairmont, where it joins the West Fork River to form the Monongahela River. (The Tygart is thus the "East Fork" of the Monongahela.) Downstream of Elkins, the Tygart passes through a gap between Rich Mountain and Laurel Mountain, which are considered to be part of the westernmost ridge of the Allegheny Mountains and the boundary between the Alleghenies and the Allegheny Plateau.

Along its course the river collects Leading Creek at Elkins; the Middle Fork River and the Buckhannon River (its largest tributary) in Barbour County; and Sandy Creek and Three Fork Creek in Taylor County. Just upstream of Grafton, the river was impounded by a U.S. Army Corps of Engineers dam in 1938 to form Tygart Lake. Valley Falls State Park is along the river between Grafton and Fairmont.

The Tygart Valley was first settled by Europeans in 1753 when David Tygart (for whom the valley and river are named) and Robert Files (or Foyle) located (separately) with their families in the vicinity of present-day Beverly. Although there had been no recent history of conflicts between whites and Indians in that immediate area, that summer a party of Indians traveling the Shawnee Trail discovered the Files cabin and killed seven members of the family. One son escaped and alerted the Tygart family, allowing all to escape. No other white settlement was attempted in present Randolph County until 1772. (It has been thought that Tygart was again among those settling then, but this is not certain).

The brothers John and Samuel Pringle, who had taken up residence along the Buckhannon tributary of the Tygart (in present Upshur County) in 1761, acted as their contemporary Daniel Boone was doing in Kentucky and guided numerous immigrant settlers into the main valley of the Tygart which at that time abounded in game and fertile bottomlands. Settlers of the 1770s and '80s included the Connelly, Hadden, Jackson, Nelson, Riffle, Stalnaker, Warwick, Westfall, Whiteman and Wilson families. (One settler, John Jackson [1715–1801] from County Londonderry, Ireland, was great-grandfather to Thomas "Stonewall" Jackson.)

All content from Kiddle encyclopedia articles (including the article images and facts) can be freely used under Attribution-ShareAlike license, unless stated otherwise. Cite this article:
Tygart Valley River Facts for Kids. Kiddle Encyclopedia.