The Buckhannon River is a 45.4-mile-long (73.1 km) tributary of the Tygart Valley River in north-central West Virginia, USA. Via the Tygart Valley, Monongahela and Ohio rivers, it is part of the watershed of the Mississippi River, draining an area of 309 square miles (800 km2) on the unglaciated portion of the Allegheny Plateau. It provides drinking water for much of Upshur County.

From Alexander the Buckhannon River flows generally northwardly, past Sago, to the city of Buckhannon, then northeastwardly into southwestern Barbour County, past Boulder (Rangoon Post Office) and Carrollton, where it is crossed by the Carrollton Covered Bridge. It joins the Tygart Valley River just downstream of Carrollton, approximately 4 miles (6 km) southwest of Philippi. 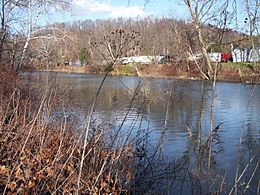 According to the West Virginia Department of Environmental Protection, approximately 79.5% of the Buckhannon River's watershed is forested, mostly deciduous; approximately 18.1% is used for agriculture and pasture; and less than 1% is urban.

Local lore holds that the Buckhannon was named for Buckongahelas (died 1805), a Lenape ally of the British during the Revolutionary War. The most plausible accounts, however, indicate the river was named for clergyman John Buchannon, a missionary who explored the region in the 1780s.

The uppermost (southernmost) stretch of the river downstream of Alexander drops approximately 400 feet (120 m) in its first 13 miles (21 km) and is boulder-strewn, providing habitat for trout (particularly brown trout), smallmouth bass, and rock bass. A low dam, installed for the provision of drinking water, forms a pool stretching upstream of Buckhannon to Sago; downstream of Sago, the Buckhannon is considered to be one of the best streams for muskellunge fishing in West Virginia. For 20 miles (32 km) downstream of Buckhannon, the river generally moves slowly between vegetation-covered banks over numerous submerged logs, providing habitat for muskies as well as smallmouth bass, rock bass, and carp. In its lowermost course above its mouth, the river assumes a higher gradient and is home to smallmouth bass, rock bass, and sunfish. 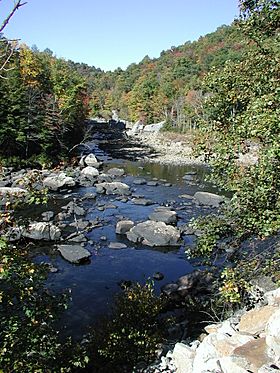 Mouth of the Buckhannon River (just above center) as it discharges into the Tygart Valley River. Photo taken along the B&O Railroad between Belington and Philippi

According to the Geographic Names Information System, the Buckhannon River has also been known as:

All content from Kiddle encyclopedia articles (including the article images and facts) can be freely used under Attribution-ShareAlike license, unless stated otherwise. Cite this article:
Buckhannon River Facts for Kids. Kiddle Encyclopedia.