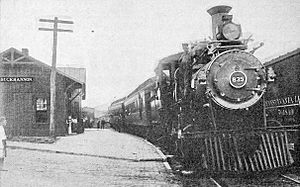 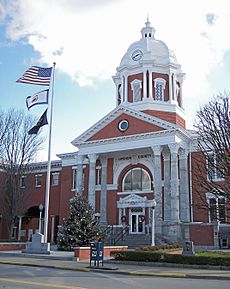 The Upshur County Courthouse in Buckhannon, 2006

Buckhannon is the only incorporated city in, and the county seat of, Upshur County, West Virginia, United States, and is located along the Buckhannon River. The population was 5,639 at the 2010 census. Buckhannon is home to West Virginia Wesleyan College and the West Virginia Strawberry Festival, held annually on the third week of May. The city is located 115 miles northeast from the capital city of Charleston and 140 miles south of Pittsburgh, Pennsylvania.

The Sago Mine collapse occurred near Buckhannon on January 2, 2006, resulting in the deaths of 12 of 13 trapped miners. At the time, it was one of the worst mining accidents in the United States for several years and attracted national news coverage.

The history of Upshur County begins with the settlement of the Buckhannon River Valley. Brothers Samuel and John Pringle were English soldiers serving in the French and Indian War (Seven Years' War) who, in 1761, deserted their post at Fort Pitt (present-day Pittsburgh, Pennsylvania). They traveled southward and upstream along the Monongahela and Tygart Valley rivers, continuing up what is now called the Buckhannon River. They were said to have arrived in present-day Upshur County in 1764 and took up living in a huge hollow of an American sycamore. They lived there for three years, living off game and fish. Finally one went out for more ammunition and found the war was over. After his return, they moved to the South Branch settlements. John later went to Kentucky, but Samuel returned to the river valley with his new wife Charity Pringle (née Cutright), her brother John Jr., friends Thomas Hughes, and John and Elizabeth Jackson with their sons George and Edward. (Edward was the grandfather of Thomas "Stonewall" Jackson.)

The City of Buckhannon was established on January 15, 1816, named after the river. Some accounts say both are named for; others that they are named after early missionary John Buchannon. The city was chartered by the Virginia General Assembly in 1852. Buckhannon was part of the Commonwealth of Virginia until the secession of West Virginia on June 20, 1863 during the American Civil War. Because of its near-central geographic location, Buckhannon was long considered a prospective site for the capital. In 1866, the legislature approved a bill including Buckhannon among the choices for capital, but officials decided the river was not wide enough to accommodate desired commerce.

The first courthouse was built in 1854. It also served as an opera house and town hall. Electricity was installed in 1891 to replace oil lamps. The building suffered fire damage in the first six months of electrical service. It was razed in 1898. In its place, a Classical Revival style courthouse, designed by Charleston architect Harrison Albright, was begun in 1899 and completed in 1901. It is still in use today. An annex of the same style was added in 1995. In the cornerstone of the main building is a time capsule filled with turn of the 19th century artifacts.

The Sago Mine Disaster, January 2, 2006, killed 12 and left one survivor. Officials said that a lightning strike in the coal caused the explosion. It was the worst mining disaster in the US since a 2001 disaster in Alabama killed 13 people, and the worst disaster in West Virginia since a 1968 incident that killed 78 people. National and international news crews were in the area for upwards of three days to cover rescue and recovery efforts.

Buckhannon takes its name from the nearby Buckhannon River. Historians believe community and river were both named for John Buchannon, a missionary to the area in the 1780s.

The city lies in the foothills of the Allegheny Mountains.

According to the United States Census Bureau, the city has a total area of 2.83 square miles (7.33 km2), all land.

The climate in this area has mild differences between highs and lows, and there is adequate rainfall year-round. According to the Köppen Climate Classification system, Buckhannon has a marine west coast climate, abbreviated "Cfb" on climate maps.

There were 2,148 households of which 22.6% had children under the age of 18 living with them, 38.5% were married couples living together, 11.6% had a female householder with no husband present, 3.4% had a male householder with no wife present, and 46.5% were non-families. 39.9% of all households were made up of individuals and 18.2% had someone living alone who was 65 years of age or older. The average household size was 2.13 and the average family size was 2.84.

There were 2,159 households out of which 22.6% had children under the age of 18 living with them, 41.1% were married couples living together, 10.9% had a female householder with no husband present, and 45.3% were non-families. 40.0% of all households were made up of individuals and 19.1% had someone living alone who was 65 years of age or older. The average household size was 2.08 and the average family size was 2.78.

All content from Kiddle encyclopedia articles (including the article images and facts) can be freely used under Attribution-ShareAlike license, unless stated otherwise. Cite this article:
Buckhannon, West Virginia Facts for Kids. Kiddle Encyclopedia.