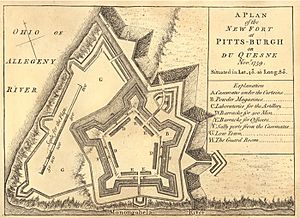 "A Plan of the New Fort at Pitts-Burgh", drawn by cartographer John Rocque and published in 1765.

Fort Pitt was a fort built by British forces between 1759 and 1761 during the French and Indian War at the confluence of the Monongahela and Allegheny rivers, where the Ohio River is formed in western Pennsylvania (modern day Pittsburgh). It was near (but not directly on) the site of Fort Duquesne, a French colonial fort built in 1754 as tensions increased between Great Britain and France in both Europe and North America. The French destroyed Fort Duquesne in 1758 when they retreated under British attack.

British colonial protection of this area ultimately led to the development of Pittsburgh and Allegheny County, Pennsylvania by British-American colonists and immigrants. 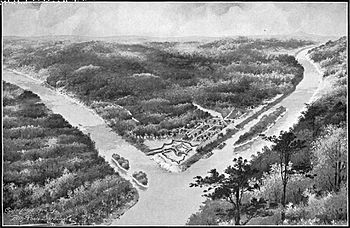 Artist's interpretation of Fort Pitt in 1759, with Allegheny (left) and Monongahela rivers. At their confluence is the Ohio River (bottom)

In April 1754, the French began building the preceding fort, Fort Duquesne, on the site of the small British Fort Prince George at the beginning of the French and Indian War (Seven Years' War). The Braddock expedition, a 1755 attempt to take Fort Duquesne, met with defeat at the Battle of the Monongahela at present-day Braddock, Pennsylvania. The French garrison defeated an attacking British regiment in September 1758 at the Battle of Fort Duquesne. French Colonel de Lignery ordered Fort Duquesne destroyed and abandoned at the approach of General John Forbes' expedition in late November.

The Forbes expedition was successful where the Braddock expedition had failed because the Treaty of Easton of 1758 reduced French alliances with Native American tribes. Chiefs of 13 American Indian nations agreed to negotiate peace with the colonial governments of Pennsylvania and New Jersey and to abandon any alliances with the French. The nations were primarily those of the Iroquois, Lenape (Delaware), and Shawnee, who agreed to the treaty in return for the colonial governments' promising to respect their rights to hunting and territory in the Ohio Country, to prohibit establishing new settlements west of the Appalachian Mountains, and to withdraw British and colonial military troops after the war. The Indians wanted a trading post at Fort Duquesne, but they did not want a British army garrison or colonial settlement. The British colonists built a new fort and named it Fort Pitt, after William Pitt the Elder. The fort was built from 1759 to 1761 during the French and Indian War (Seven Years' War), next to the site of former Fort Duquesne. 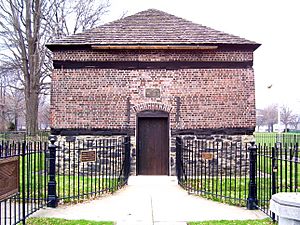 The Fort Pitt Blockhouse, constructed in 1764

After the colonial war and in the face of continued broken treaties, broken promises and encroachment by the Europeans, in 1763 the western Lenape and Shawnee took part in a Native uprising known as Pontiac's War, an effort to drive settlers out of the Native American territory. The Indians' siege of Fort Pitt began on June 22, 1763, but they found it too well-fortified to be taken by force. In negotiations during the siege, Captain Simeon Ecuyer, the commander of Fort Pitt, gave two Delaware emissaries blankets that had been exposed to smallpox. The potential of this act to cause an epidemic among the Indians was clearly understood. Commander William Trent wrote that he hoped "it will have the desired effect." Colonel Henry Bouquet, leading a relief force, would discuss similar tactics with Commander-in-Chief Jeffery Amherst. During and after Pontiac's War, epidemics of smallpox among Native Americans devastated the tribes of Ohio Valley and the Great Lakes area. On August 1, 1763, most of the Indians broke off the siege to intercept the approaching force under Colonel Bouquet. In the Battle of Bushy Run, Bouquet fought off the Indian attack and relieved Fort Pitt on August 10.

After Pontiac's War, the British Crown turned it over to the colonists in 1772. At that time, the Pittsburgh area was claimed by the colonies of both Virginia and Pennsylvania, which struggled for power over the region. After Virginians took control of Fort Pitt, they called it Fort Dunmore, in honour of Virginia's Governor Lord Dunmore. The fort served as a staging ground in Dunmore's War of 1774.

During the American Revolutionary War, Fort Pitt served as a headquarters for the western theatre of the war. In present-day Michigan, the British garrisoned Fort Detroit.

Only a redoubt, a small brick outbuilding called the Blockhouse, remains in Point State Park as the only intact remnant of Fort Pitt. Erected in 1764, it is believed to be the oldest building still standing in Pittsburgh, and likely within the Mississippi Valley. Used for many years as a private residence, the blockhouse was purchased and preserved for many years by the local chapter of the Daughters of the American Revolution. 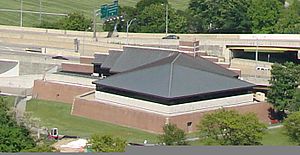 A view of the Fort Pitt Museum from Mount Washington; its structure is a recreation of a bastion of Ft. Pitt.

Notice was given to area residents of an auction of all salvagable remains of the fort on August 3, 1797 after the U.S. Army decommissioned the site.

The city of Pittsburgh commissioned archeological excavation of the foundations of Fort Pitt. Afterward, some of the fort was reconstructed to give visitors at Point State Park a sense of the size of the fort. In this rebuilt section, the Fort Pitt Museum is housed in the Monongahela Bastion, and excavated portions of the fort were filled in.

Fort Pitt Foundry was an important armaments manufacturing center for the Federal government during the Civil War, under the charge of William Metcalf.

All content from Kiddle encyclopedia articles (including the article images and facts) can be freely used under Attribution-ShareAlike license, unless stated otherwise. Cite this article:
Fort Pitt (Pennsylvania) Facts for Kids. Kiddle Encyclopedia.