Fort Presque Isle (also Fort de la Presqu'île) was a fort built by French soldiers in summer 1753 along Presque Isle Bay at present-day Erie, Pennsylvania, to protect the northern terminus of the Venango Path. It was the first of the French posts built in the Ohio Country, and was part of a line that included Fort Le Boeuf, Fort Machault, and Fort Duquesne.

The fort was built as part of the French military occupation of the Ohio Country; rival claims to the area by the British led to the French and Indian War. After the 1759 British victory at the Battle of Fort Niagara, the French burned the fort and retreated from the area.

The British built a new Fort Presque Isle, which was captured by American Indians during Pontiac's Rebellion. On June 19, 1763, the fort was surrounded by about 250 Ottawas, Ojibwas, Wyandots, and Senecas. After holding out for two days, the garrison of approximately sixty men surrendered on the condition that they could return to Fort Pitt. Most were instead killed after emerging from the fort. 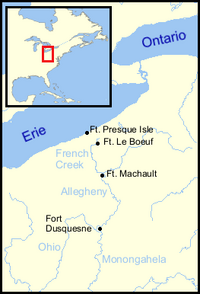 General Anthony Wayne first arrived in the area of Presque Isle in 1786. In 1795, 200 Federal troops from Wayne's army, under the direction of Captain John Grubb, built a blockhouse on Garrison Hill, in present-day Erie, Pennsylvania. Also named Fort Presque Isle, the blockhouse was used as part of a defense against Native American uprisings. It was also used during the War of 1812. General Wayne was stricken ill at Fort Presque Isle and died there in 1796. At his request, his body was buried under the flagpole of the northwest blockhouse of the fort. This blockhouse burned in 1852. In 1880, the Commonwealth of Pennsylvania reconstructed the blockhouse at Second and Ash Streets, Erie, as a memorial to General Wayne. The Pennsylvania Historical and Museum Commission has recognized the reconstructed blockhouse as eligible for placement on the National Register of Historic Places. The blockhouse is located at N 42° 08.400, W 80° 04.463.

All content from Kiddle encyclopedia articles (including the article images and facts) can be freely used under Attribution-ShareAlike license, unless stated otherwise. Cite this article:
Fort Presque Isle Facts for Kids. Kiddle Encyclopedia.