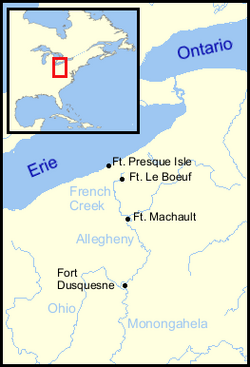 Fort Machault was a fort built by the French in 1754 near the confluence of French Creek with the Allegheny River, at present-day Franklin, in northwest Pennsylvania. The fort was part of a line that included Fort Presque Isle, Fort Le Boeuf, and Fort Duquesne.

The fort was built on a hill, 60 yards west of the Allegheny River. The fort was in the form of a parallelogram, about 75 by 105 feet (32 m). The curtain was made of hewed timber, stacked lengthwise. The four corners had bastions in the form of polygons. The bastions were built of saplings, eight inches (203 mm) thick, and 13 feet (4.0 m) in height. The gate fronted the river. Inside the fort were a magazine, several officer's barracks, with two stories and stone chimneys. The soldiers barracks consisted of 45 buildings outside the fort.

In 1753, Governor Jean de Lauson sought to build a fortified trading post at the confluence of the Allegheny River and French Creek at Venango. That year, the English traders were expelled from Venango and Captain Philippe-Thomas Chabert de Joncaire established Fort d'Anjou with a permanent garrison at the location.

In December 1753, George Washington used the Venango Path to reach Fort Machault during his first expedition into the Ohio Country. Washington, with an escort of seven men and a letter from Governor Robert Dinwiddie of Virginia, protesting the French invasion of lands claimed by Great Britain and demanding their immediate withdrawal. The French officer at the fort said he did not have the power to negotiate with the British. Therefore, he told Washington to go to Fort Le Boeuf instead to meet with a higher-ranking officer. The French and Indian War began on May 28, 1754 with the Battle of Jumonville Glen.

Captain Philippe-Thomas Chabert de Joncaire finished building Fort d'Anjou Fort Machault in April 1754. It was named in honor of prominent financier, Jean-Baptiste Machault d'Arnouville, the French Minister of the Marine at the time of its construction. It was also known as "Venango," the name of the nearby Delaware Indian village.

Captain Philippe-Thomas Chabert de Joncaire was replaced by Michel Maray de La Chauvignerie as the officer in charge of constructing the fort in 1754, which eventually became Fort Machault. La Chauvignerie's construction efforts were set back by shortages of manpower and wood, resulting in sporadic construction and improvements until November 1758 when he was replaced by François-Marie Le Marchand de Lignery. 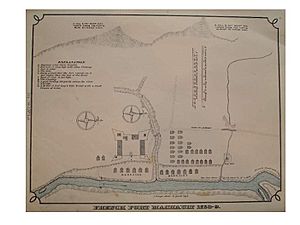 This map, from 1879 History of Venango County Pennsylvania, depicts the area where the fort was stationed. This is current-day Franklin, Pennsylvania.

One of four forts built by the French and Canadiens, to control the Venango Path between Lake Erie and the Ohio River, Fort Machault was located in modern Franklin, Pennsylvania, at the confluence of French Creek and the Allegheny River. Fort Machault was the last stop on the supply route from Canada to Fort Duquesne. Prior to the arrival of the French in 1753, Pennsylvania blacksmith and Indian trader John Fraser had set up shop on this site, supplying Indians in the region with trade goods and repairing their guns and other metal wares. His business was an example of the western expansion of Pennsylvania's fur trade that prompted the French to fortify the Ohio Country, for fear of losing trade and influence among the Indians there.

In 1756, William Johnson, who had escaped from Native Americans, described the fort as a "Captain's command of about 50 men; the Fort of Stockades, very weak, and scarce of provisions . . . "

In 1758, Colonel Mercer, in a report from Fort Pitt, reported that there were about 100 soldiers at Fort Machault, where the French had 11 flat-bottomed boats called "batteaus" and a large gun the size of a quart pot "which they fire off by a train of powder."

After abandoning Fort Duquesne in November 1758, the French fell back to Fort Machault, and the British expected them to launch a counterattack from there in the following campaign season. In July 1759, the French began a campaign to capture Fort Pitt. Nearly a thousand French and Canadiens and a thousand Native Americans mustered at Fort Machault. The British, however, began a siege of Fort Niagara. The fall of Fort Niagara in summer 1759, however, made the French presence in the Ohio Country untenable. The assault on Fort Pitt was abandoned, and available forces were sent to relieve Fort Niagara.

On July 25, 1759, the French surrendered Fort Niagara. In August 1759, the commander of Fort Presque Isle sent word to Fort Le Boeuf and Fort Machault to abandon their forts. The French burned Fort Machault to the ground and retreated to Canada in anticipation of a British expedition north from the Forks of the Ohio. In 1760, the British built Fort Venango near this site.

All content from Kiddle encyclopedia articles (including the article images and facts) can be freely used under Attribution-ShareAlike license, unless stated otherwise. Cite this article:
Fort Machault Facts for Kids. Kiddle Encyclopedia.