Kids Encyclopedia Facts
Not to be confused with Acer pseudoplatanus found in Europe or Ficus sycomorus in Africa and the Middle East.

Platanus occidentalis, also known as American sycamore, American planetree, western plane, occidental plane, buttonwood, and water beech, is a species of Platanus native to the eastern and central United States, the mountains of northeastern Mexico, extreme southern Ontario, and possibly extreme southern Quebec. It is usually called sycamore in North America, a name which can refer to other types of tree in other parts of the world.

The species epithet occidentalis is Latin for "western", referring to the Western Hemisphere, because at the time when it was named by Carl Linnaeus, the only other species in the genus was P. orientalis ("eastern"), native to the Eastern Hemisphere.

An American sycamore tree can often be easily distinguished from other trees by its mottled bark which flakes off in large irregular masses, leaving the surface mottled and gray, greenish-white and brown. The bark of all trees has to yield to a growing trunk by stretching, splitting, or infilling. The sycamore shows the process more openly than many other trees. The explanation is found in the rigid texture of the bark tissue which lacks the elasticity of the bark of some other trees, so it is incapable of stretching to accommodate the growth of the wood underneath, so the tree sloughs it off.

A sycamore can grow to massive proportions, typically reaching up to 30 to 40 m (98 to 131 ft) high and 1.5 to 2 m (4.9 to 6.6 ft) in diameter when grown in deep soils. The largest of the species have been measured to 53 m (174 ft), and nearly 4 m (13 ft) in diameter. Larger specimens were recorded in historical times. In 1744, a Shenandoah Valley settler named Joseph Hampton and two sons lived for most of the year in a hollow sycamore in what is now Clarke County, Virginia. In 1770, at Point Pleasant, Virginia (now in West Virginia) near the junction of the Kanawha and Ohio Rivers, George Washington recorded in his journal a sycamore measuring 13.67 m (44 ft 10 in) in circumference at 91 cm (3 ft) from the ground.

The sycamore tree is often divided near the ground into several secondary trunks, very free from branches. Spreading limbs at the top make an irregular, open head. Roots are fibrous. The trunks of large trees are often hollow.

Another peculiarity is the way the leaves grow sticky, green buds. In early August, most trees in general will have—nestled in the axils of their leaves—the tiny forming bud which will produce the leaves of the coming year. The sycamore branch apparently has no such buds. Instead there is an enlargement of the petiole which encloses the bud in a tight-fitting case at the base of the petiole. 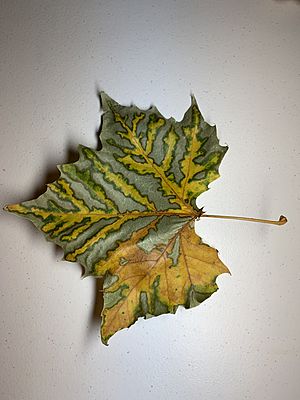 In its native range, it is often found in riparian and wetland areas. The range extends from Iowa to Ontario and Maine in the north, Nebraska in the west, and south to Texas and Florida. Closely related species (see Platanus) occur in Mexico and the southwestern states of the United States. It is sometimes grown for timber, and has become naturalized in some areas outside its native range. It can be found growing successfully in Bismarck, North Dakota, and it is sold as far south as Okeechobee. The American sycamore is also well adapted to life in Argentina and Australia and is quite widespread across the Australian continent especially in the cooler southern states such as Victoria and New South Wales. 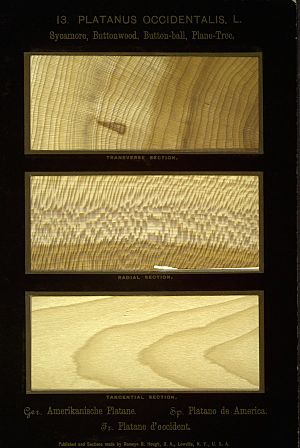 Wood of the Platanus occidentalis. From Romeyn Beck Hough's fourteen-volume work The American Woods, a collection of over 1000 paper-thin wood samples representing more than 350 varieties of North American tree.

The American sycamore is able to endure a big city environment and was formerly extensively planted as a shade tree, but due to the defacing effects of anthracnose it has been largely usurped in this function by the resistant London plane.

Its wood has been used extensively for butcher's blocks. It has been used for boxes and crates; although coarse-grained and difficult to work, it has also been used to make furniture, siding, and musical instruments.

Investigations have been made into its use as a biomass crop.

The American sycamore is a favored food plant of the pest sycamore leaf beetle.

American sycamore is susceptible to plane anthracnose disease (Apiognomonia veneta, syn. Gnomonia platani), an introduced fungus found naturally on the Oriental plane P. orientalis, which has evolved considerable resistance to the disease. Although rarely killed or even seriously harmed, American sycamore is commonly partially defoliated by the disease, rendering it unsightly as a specimen tree.

Sometimes mistaken for frost damage, the disease manifests in early spring, wilting new leaves and causing mature leaves to turn brown along the veins. Infected leaves typically shrivel and fall, so that by summer the tree is regrowing its foliage. Cankers form on twigs and branches near infected leaves, serving to spread the disease by spore production and also weakening the tree. Because cankers restrict the flow of nutrients, twigs and branches afflicted by cankers eventually die. Witch's broom is a symptom reflecting the cycle of twigs dying.

As a result of the fungus' damage, American sycamore is often avoided as a landscape tree, and the more resistant London plane (P. × hispanica; hybrid P. occidentalis × P. orientalis) is planted instead.

The terms under which the New York Stock Exchange was formed are called the "Buttonwood Agreement," because it was signed under a buttonwood (sycamore) tree at 68 Wall Street, New York City in 1792.

The sycamore made up a large part of the forests of Greenland and Arctic America during the Cretaceous and Tertiary periods. It once grew abundantly in central Europe, from which it has now disappeared. It was brought to Europe early in the 17th century.

All content from Kiddle encyclopedia articles (including the article images and facts) can be freely used under Attribution-ShareAlike license, unless stated otherwise. Cite this article:
American sycamore Facts for Kids. Kiddle Encyclopedia.