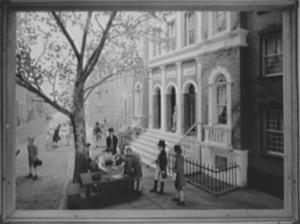 Depiction of traders under the buttonwood tree 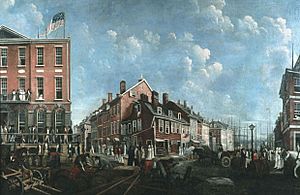 A 1797 painting by Francis Guy. The building with the American flag is the Tontine Coffee House. Diagonally opposite (southeast corner, extreme right) is the Merchant's Coffee House, where the brokers of the Buttonwood Agreement and others traded before the construction of the Tontine. On the right is Wall Street, leading down to the East River.

The Buttonwood Agreement is the founding document of what is now New York Stock Exchange and is one of the most important financial documents in U.S. history. The agreement organized securities trading in New York City and was signed on May 17, 1792 between 24 stockbrokers outside of 68 Wall Street. According to legend the signing took place under a platanus occidentalis, a buttonwood tree, but this tree may never have existed. The New York Stock Exchange celebrates the signing of this agreement on May 17, 1792 as its founding.

Later in 1793, they conducted their business inside the Tontine Coffee House.

The Economist, a newsweekly based in London, named its financial markets column after the agreement.

The document is now part of the archival collection of the New York Stock Exchange.

In brief, the agreement had two provisions: 1) the brokers were to deal only with each other, thereby eliminating the auctioneers, and 2) the commissions were to be 0.25%. It reads as follows:

We the Subscribers, Brokers for the Purchase and Sale of the Public Stock, do hereby solemnly promise and pledge ourselves to each other, that we will not buy or sell from this day for any person whatsoever, any kind of Public Stock, at a less rate than one quarter percent Commission on the Specie value and that we will give preference to each other in our Negotiations. In Testimony whereof we have set our hands this 17th day of May at New York, 1792.

The twenty-four brokers, known as Founding and Subsequent Fathers, who signed the Buttonwood Agreement were (including business location):

All content from Kiddle encyclopedia articles (including the article images and facts) can be freely used under Attribution-ShareAlike license, unless stated otherwise. Cite this article:
Buttonwood Agreement Facts for Kids. Kiddle Encyclopedia.