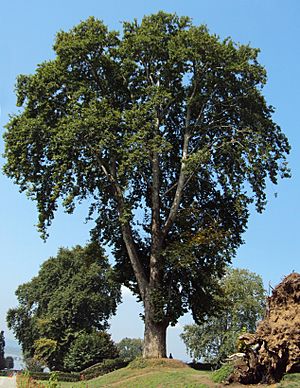 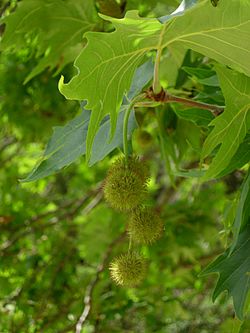 Platanus orientalis, also called Oriental plane tree and chenar, is a large, deciduous tree of the Platanaceae family. It is known for its longevity and spreading crown.

The species name derives from its historical distribution eastward from the Balkans, where it was recognized in ancient Greek history and literature. Following Greek usage it is called Platane or related names in Europe. It was equally as famous to the Iranian-speaking world and from Turkey to Occupied Kashmir is called Chenar or related names, following the Iranian.

The native range of the Oriental plane is Eurasia from the Balkans to as far east as at least Iran. Some accounts extend its native range to Iberia in the west, and to the Himalayas in the east.

The oriental plane is found naturally in riverine settings, together with such trees as alder, willow and poplar. However, it is quite capable of survival and success in dry soils once it is established. In Kashmir it is recognised as the State tree of the region.

All content from Kiddle encyclopedia articles (including the article images and facts) can be freely used under Attribution-ShareAlike license, unless stated otherwise. Cite this article:
Platanus orientalis Facts for Kids. Kiddle Encyclopedia.