Srinagar is the largest city and the summer capital of the Indian union territory of Jammu and Kashmir. It lies in the Kashmir Valley on the banks of the Jhelum River, a tributary of the Indus, and Dal and Anchar lakes. The city is known for its natural environment, gardens, waterfronts and houseboats. It is also known for traditional Kashmiri handicrafts and dried fruits. It is the northernmost city of India with over one million people.

The earliest records, such as Kalhana's Rajatarangini, the name Siri-nagar (or Sri-nagara) is mentioned, which in turn is a local transformation of the Sanskrit name Sūrya-nagar, meaning "City of the Sun". The name Sri-nagar is also used in the records of the Chinese Tang Dynasty.

Alternatively, it may have drawn its name from two Sanskrit words: śrī (venerable), and nagar (city), which would make it the "City of Wealth". 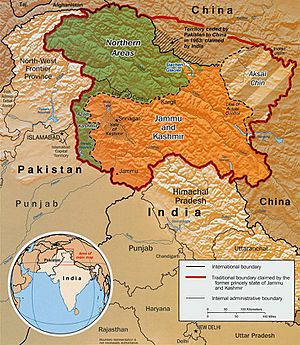 The city is located on both the sides of the Jhelum River, which is called Vyath in Kashmir. The river passes through the city and meanders through the valley, moving onward and deepening in the Wular Lake. The city is known for its nine old bridges, connecting the two parts of the city.

There are a number of lakes and swamps in and around the city. These include the Dal, the Nigeen, the Anchar, Khushal Sar, Gil Sar and Hokersar.

Hokersar is a wetland situated near Srinagar. Thousands of migratory birds come to Hokersar from Siberia and other regions in the winter season. Migratory birds from Siberia and Central Asia use wetlands in Kashmir as their transitory camps between September and October and again around spring. These wetlands play a vital role in sustaining a large population of wintering, staging and breeding birds.

Hokersar is 14 km (8.7 mi) north of Srinagar, and is a world class wetland spread over 13.75 km2 (5.31 sq mi) including lake and marshy area. It is the most accessible and well-known of Kashmir's wetlands which include Hygam, Shalibug and Mirgund. A record number of migratory birds have visited Hokersar in recent years.

All content from Kiddle encyclopedia articles (including the article images and facts) can be freely used under Attribution-ShareAlike license, unless stated otherwise. Cite this article:
Srinagar Facts for Kids. Kiddle Encyclopedia.