The Northern Shoveler is a common and widespread duck. It breeds in northern areas of Europe and Asia and across most of North America, and is a rare vagrant to Australia. In North America, it breeds along the southern edge of Hudson Bay and west of this body of water, and as far south as the Great Lakes west to Colorado, Nevada, and Oregon. 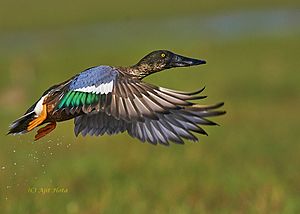 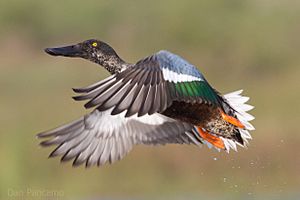 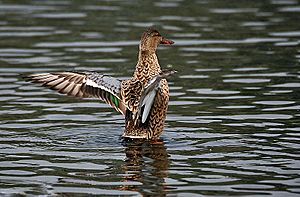 Female stretching after bathing in Kolkata

This species is unmistakable in the northern hemisphere due to its large spatulate bill. The breeding drake has an iridescent dark green head, white breast and chestnut belly and flanks. In flight, pale blue forewing feathers are revealed, separated from the green speculum by a white border. In early fall the male will have a white crescent on each side of the face. In non-breeding (eclipse) plumage, the drake resembles the female.

The female is a drab mottled brown like other dabblers, with plumage much like a female mallard, but easily distinguished by the long broad bill, which is gray tinged with orange on cutting edge and lower mandible. The female's forewing is gray. 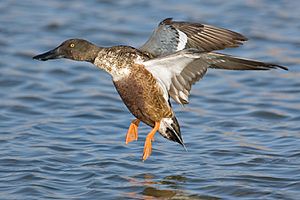 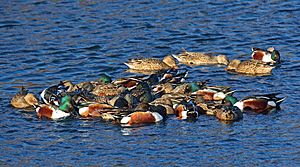 Large groups of northern shovelers swim rapidly in circles to collect food from the surface by creating a funnel effect.

Northern shovelers feed by dabbling for plant food, often by swinging its bill from side to side and using the bill to strain food from the water. They use their highly specialized bill (from which their name is derived) to forage for aquatic invertebrates – a carnivorous diet. Their wide-flat bill is equipped with well-developed lamellae – small, comb-like structures on the edge of the bill that act like sieves, allowing the birds to skim crustaceans and plankton from the water's surface. This adaptation, more specialized in shovelers, gives them an advantage over other puddle ducks, with which they do not have to compete for food resources during most of the year. Thus, mud-bottomed marshes rich in invertebrate life are their habitat of choices.

The shoveler prefers to nest in grassy areas away from open water. Their nest is a shallow depression on the ground, lined with plant material and down. Hens typically lay about nine eggs. The drakes are very territorial during breeding season and will defend their territory and partners from competing males. Drakes also engage in elaborate courtship behaviors, both on the water and in the air; it is not uncommon for a dozen or more males to pursue a single hen. Despite their fat appearance, shovelers are great fliers.

This is a fairly quiet species. The male has a clunking call, whereas the female has a Mallard-like quack. 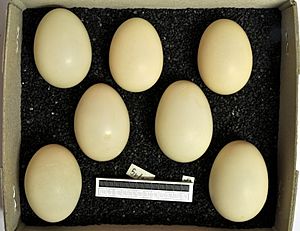 This is a bird of open wetlands, such as wet grassland or marshes with some emergent vegetation. It breeds in wide areas across Eurasia, western North America and the Great Lakes region of the United States.

In North America it winters south of a line from Washington to Idaho and from New Mexico east to Kentucky, also along the Eastern Seaboard as far north as Massachusetts.

In the British Isles, home to more than 20% of the North Western European population, it is best known as a winter visitor, although it is more frequently seen in southern and eastern England, especially around the Ouse Washes, the Humber and the North Kent Marshes, and in much smaller numbers in Scotland and western parts of England. In winter, breeding birds move south, and are replaced by an influx of continental birds from further north. It breeds across most of Ireland, but the population there is very difficult to assess.

It is strongly migratory and winters further south than its breeding range. It has occasionally been reported as a vagrant as far south as Australia, New Zealand and South Africa.

All content from Kiddle encyclopedia articles (including the article images and facts) can be freely used under Attribution-ShareAlike license, unless stated otherwise. Cite this article:
Northern Shoveler Facts for Kids. Kiddle Encyclopedia.