Joanna Lamond Lumley, OBE, FRGS (born 1 May 1946) is an English actress, former model, author and activist. She won two BAFTA TV Awards for her role as Patsy Stone in the BBC sitcom Absolutely Fabulous (1992–2012), and was nominated for the 2011 Tony Award for Best Featured Actress in a Play for the Broadway revival of La Bête. In 2013, she received the Special Recognition Award at the National Television Awards and in 2017, she was honoured with the BAFTA Fellowship award.

Lumley is an advocate and human rights activist for Survival International and the Gurkha Justice Campaign. She supports charities and animal welfare groups, such as Compassion in World Farming and Vegetarians' International Voice for Animals. She is also patron of the Farm Animal Sanctuary. She is also known as 'daughter of Nepal' in Nepal

Lumley was brought up in Kent, England, where she attended Mickledene School in Rolvenden as a boarder. The family spent time in Hong Kong and Malaya (now Malaysia). Lumley was educated at The Convent of Our Lady School in St Leonards-on-Sea, Sussex, and afterwards attended the Lucie Clayton Finishing School, after being turned down by the Royal Academy of Dramatic Art at the age of 16. 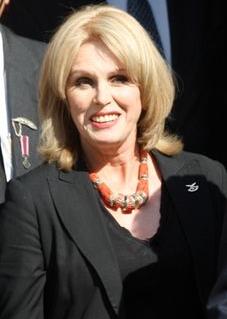 Lumley's son, James, was born in 1967. James Lumley's father is the photographer Michael Claydon. Lumley was briefly married to actor Jeremy Lloyd during 1970. In 1986, she married the conductor Stephen Barlow; they live in London. They also own a house near the village of Penpont, Dumfries and Galloway in South West Scotland.

Lumley supports charities including Suffolk Family Carers, Child Rescue Nepal and Kids for Kids. She has been a vegetarian for 40 years,. She has donated books to Book Aid International. She is patron of the Born Free Foundation and passionate about the Free Tibet campaign.

Other charities supported include Mind, ActionAid, SANE, Kidasha (formerly CWS) which works on behalf of children in Nepal, and the Spike Milligan statue memorial fund, based in Finchley, north London. In 2017, Lumley became a Patron of the Finchley Society.

All content from Kiddle encyclopedia articles (including the article images and facts) can be freely used under Attribution-ShareAlike license, unless stated otherwise. Cite this article:
Joanna Lumley Facts for Kids. Kiddle Encyclopedia.