The Jhelum River is a river of northwestern India and eastern Pakistan. It is the westernmost of the five rivers of Punjab, and passes through Srinager District. It is a tributary of the Indus River and has a total length of about 725 kilometres (450 mi). 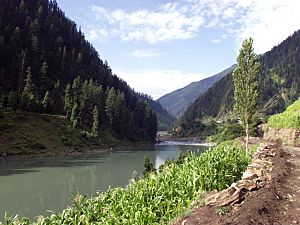 The river has rich power generation potential in India. Water control structures are being built as a result of the Indus Basin Project, including the following:

All content from Kiddle encyclopedia articles (including the article images and facts) can be freely used under Attribution-ShareAlike license, unless stated otherwise. Cite this article:
Jhelum River Facts for Kids. Kiddle Encyclopedia.