Muzaffarabad (Urdu: مزففرآباد) is the capital city of Azad Kashmir. It is in Muzaffarabad District on the banks of the Jhelum and Neelum rivers. It is very hilly.

The district is bounded by Khyber Pakhtunkhwa in the west, by the Kupwara and Baramulla districts of the Indian Jammu and Kashmir in the east, and the Neelum District of Azad Kashmir in the north. 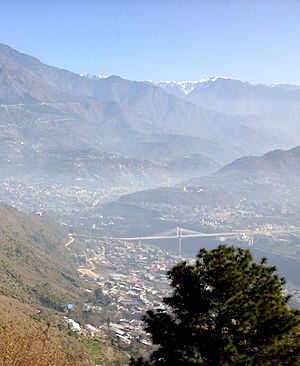 Muzaffarabad has largely been rebuilt since the 2005 earthquake.

All content from Kiddle encyclopedia articles (including the article images and facts) can be freely used under Attribution-ShareAlike license, unless stated otherwise. Cite this article:
Muzaffarabad Facts for Kids. Kiddle Encyclopedia.