PKT is the time zone used in Pakistan. It is 5 hours ahead of GMT/UTC. 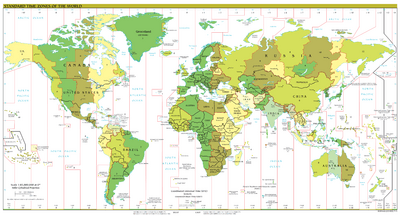 Standard Time Zones of the World.

In 2002, the government of Pakistan decided to use the Daylight Saving Time system. This meant that every year, clocks would be put forward by one hour on the night between the first Saturday and Sunday of April until 15 October when the clocks were put back. The experiment was not repeated again under the Musharraf Regime.

All content from Kiddle encyclopedia articles (including the article images and facts) can be freely used under Attribution-ShareAlike license, unless stated otherwise. Cite this article:
Pakistan Standard Time Facts for Kids. Kiddle Encyclopedia.