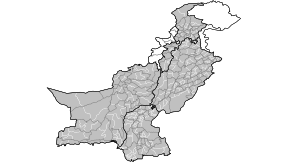 A tehsil (also known as a mandal, tahsil, tahasil, taluka, taluk, or taluq) is a unit of government in Pakistan and in the Republic of India - it is similar to a county. It usually consists of a town (possibly more towns) and the villages around the towns.

In Pakistan, Tehsils are the second administrative division. They are further subdivided into Union Councils. Many Tehsils are grouped together into a district (Zillah). In Sindh the name taluka is generally used instead of tehsil.

In India, some states use taluk or taluka, others use tehsil. The TK often found in Indian addresses stands for Taluk.

All content from Kiddle encyclopedia articles (including the article images and facts) can be freely used under Attribution-ShareAlike license, unless stated otherwise. Cite this article:
Tehsil Facts for Kids. Kiddle Encyclopedia.