Jhelum is a city on the right bank of the Jhelum River, in the district of the same name in the north of Punjab province, Pakistan. Jhelum is known for providing a large number of soldiers to the British Army before independence, and later to the Pakistan armed forces - due to which it is also known as City of Soldiers or Land of Martyrs and Warriors.

Jhelum is a few miles upstream from the site of the ancient Battle of the Hydaspes between the armies of Alexander and King Porus. A city called Bucephala was founded nearby to commemorate the death of Alexander's horse, Bucephalus. Other notable sites nearby include the 16th-century Rohtas Fort, the Tilla Jogian complex of ancient temples, and the 16th-century Grand Trunk Road which passes through the city.

According to the 1998 census of Pakistan, the population of Jhelum was 145,647 and in 2012 its population is 188,803. The name of the city is derived from the words Jal (pure water) and Ham (snow), as the river that flows through the river originates in the Himalayas. There are a number of industries in and around Jhelum city, including a tobacco factory, wood, marble, glass and flour mills. 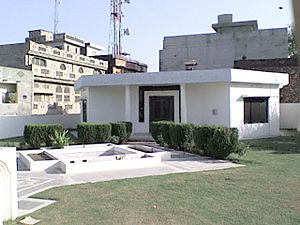 Rohtas Fort is a garrison fort built by the great Afghan king Sher Shah Suri. This fort is about 4 km in circumference. Qila Rohtas is situated in a gorge approximately 18 km NW of Jhelum and 7 km from Dina.

The old city has a fascinating labyrinth of narrow streets and crowded bazaars. Opposite to the CMH Jhelum Cantt is located the beautiful mosque of the city, CMH Masjid Jhelum.

Located in the cantonment area is the St. John's Church Jhelum which was built in 1860. There was a local stadium near Gul Afshan Colony which was changed to a cricket stadium named Zamir Jaffri Cricket Stadium. Altaf Park which was constructed in 1994–95 is in a very close proximity of Cricket Stadium.

Nearly 100 m from Shandar Chowk, in the center of city, is Major Akram Shaheed Memorial Park. Major Muhammad Akram Memorial Library is also present in this park. This is also a site of a parade which takes place every year on 6 September at the occasion of Defence Day. 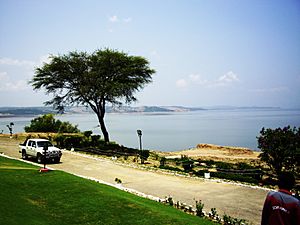 The Mangla Dam is located on the Jhelum River about 30 km (19 mi) from Jhelum, it is the twelfth largest dam in the world. It was constructed in 1967 across the Jhelum River. There is the Mangla View Resort that is the first planned resort development in Pakistan to offer residences, villas, townhouses, hotels, serviced apartments & retail outlets. The resort is located on a 340-acre (1.4 km2) site on the Mangla Dam area.

Rasul Barrage is located on the Jhelum River about 30 km downstream from Jhelum. Two major water canals originate at the Rasul barrage, Rasul-Qadirabad link canal which is also called Lower-Jhelum link canal and Rasul-Shahpur branch canal. The area around the Rasul Barrage lake is also a picnic spot. 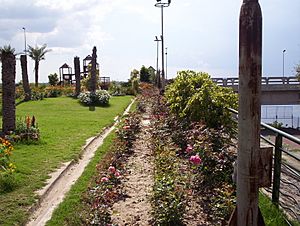 The lawn of Tulip Riverside Hotel

Auto Rickshaws are a popular mode of transport for short routes within the city. Many of the new rickshaws in the city use Compressed natural gas (CNG) instead of the petrol engines as CNG is environmentally clean and cheaper than petrol. Rickshaws are another important mode of transportation. The older horse drawn tongas are now defunct although some can still be privately commissioned. Taxis and privately commissioned small passenger carrying vans are available.

All content from Kiddle encyclopedia articles (including the article images and facts) can be freely used under Attribution-ShareAlike license, unless stated otherwise. Cite this article:
Jhelum Facts for Kids. Kiddle Encyclopedia.