Jhelum District (Urdu: ضلع جہلم) is in the Punjab province of Pakistan. According the 1998 census, the district had 936,957 people, of which 31.48% were urban. Jhelum is known for providing many soldiers to the British and later to the Pakistan armed forces due to which it is also known as city of soldiers or land of martyrs and warriors. The district of Jhelum stretches from the Jhelum River almost to the Indus. Salt is quarried at the Mayo mine in the Salt Range. There are two coal-mines, the only ones worked in the province, from which the North-Western railway gets some of coal. The chief centre of the salt trade is Pind Dadan Khan. The district is crossed by the main line of the North-Western railway, and also traversed along the south by a branch line. It is in the north of the Punjab province, Jhelum district is bordered by Sargodha to its south, Gujrat and the Jhelum River to its south and east, Chakwal to its west, Mirpur to its east, and Rawalpindi to its north. 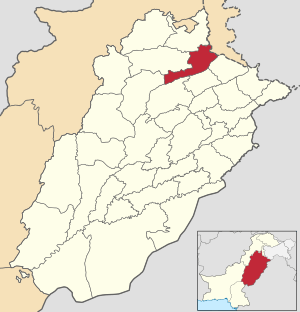 The district of Jhelum, which covers an area of 3,587 km2, is administratively divided into four tehsils: Jhelum, Sohawa, Pind Dadan Khan and Dina, - which are divided into 53 Union Councils. It also contains the city of Jhelum.

According to the 1998 census of Pakistan, 936,957 people lived in Jhelum District. There were 261 people per square kilometre. According the Punjab Education Department's annual literacy statistics for 2006, Jhelum had a literacy rate of 79% which is among the highest in Pakistan. Human Development Index of Jhelum is 0.770, which highest in Pakistan after Karachi. 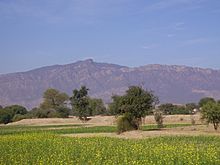 The climate of the tract is extreme. In winter it is very cold and summer is very hot. The average rainfall varies from 48 to 69 mm each year.

All content from Kiddle encyclopedia articles (including the article images and facts) can be freely used under Attribution-ShareAlike license, unless stated otherwise. Cite this article:
Jhelum District Facts for Kids. Kiddle Encyclopedia.