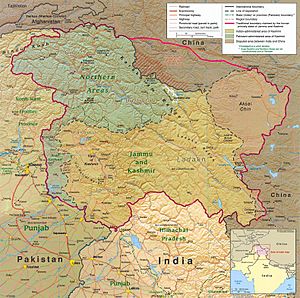 Mirpur District (Urdu: ضلع میرپور) is a district in Pakistan's Azad Kashmir Liberated Territory. The district is named after the main city - Mirpur. The District of Mirpur comprises mostly plain and some hilly areas. Its hot and dry climate and other geographical conditions closely resemble those of Jhelum and Gujrat, the adjoining Districts of Pakistan.

Mirpur District is now located in the south west of the Kashmir region. Azad Jammu & Kashmir is administered by Pakistan from Islamabad. Azad Kashmir has been considered politically, constitutionally and geographically as part of a separate state, i.e. Jammu and Kashmir. This state is a disputed territory and has been controlled by both Pakistan and India, since their independence, 14 / 15th August 1947, respectively. Azad Kashmir is under the indirect control of Pakistan, however its defence, foreign policy and currency are under the direct control of Pakistan.

Also its chairman / chief executive is always the President of Pakistan. Hence, the rest of members are Azad Kashmir's own Prime Minister and President and some ministers, (also note that Azad Kashmir has its own president, prime minister and legislative assembly also supreme-court and high-court & other departments). The Central Board of Revenue (CBR) is responsible for tax affairs of rest of all Pakistani territory, i.e. all four provinces and the capital, Islamabad.

People from this former Punjab region now known as Azad Kashmir are ethnic Pahari who have historically looked abroad for employment. Many a ship employed Mirpuri boiler men in the age of steam. During the two world wars many Mirpuris enlisted in the merchant navy and armed services. During the last four decades a large number of people from this district have gone abroad, especially to United Kingdom for earning their livelihood. The Mangla Dam project in the early sixties resulted in the displacement of a large number of people, who under an agreement between the Pakistan government and the British government, were allowed to settle in the UK, where they are usually known as Mirpuri and play a role in the British society, economy, and politics.

As such, they are today the major foreign exchange earning resource for Pakistan. Around 50,000 people were moved from this district in the mid-sixties to make way for the construction of Mangla Dam, but corrupt handling of funds meant long drawn out delays in completing the project. Most of these people settled in new Mirpur whilst some moved elsewhere in Pakistan or to the UK.

Mirpur is divided into the following tehsils

Notable places within the district are

Mirpur became part of Kashmir in 1846 as part of the treaty of Amritsar between the British and the Maharaja Gulab Singh.Before the treaty Mirpur was part of the Punjab. Although they are citizens of Kashmir the peoples of Mirpur are ethnic Pahari's in much the same way as Attock has a large Pashtun population even though it only became part of the Punjab in 1970 when Ayub Khan removed it from Khyber Pakhtunkhwa. The caste system in Mipur is very strong despite the most of people living in UK. The famous castes in Mirpur are:

All content from Kiddle encyclopedia articles (including the article images and facts) can be freely used under Attribution-ShareAlike license, unless stated otherwise. Cite this article:
Mirpur District Facts for Kids. Kiddle Encyclopedia.