The Grand Trunk Road (commonly abbreviated to GT Road) is one of South Asia's oldest and longest major roads. For several centuries, it has linked the eastern and western regions of the Indian subcontinent, running from Bengal, across north Republic of India, into Peshawar in Pakistan.

It was built by Sher Shah Suri and is also known as "Sadak E Sher Shah" named after him. 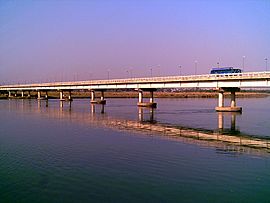 GT Road above The River Jhelum

All content from Kiddle encyclopedia articles (including the article images and facts) can be freely used under Attribution-ShareAlike license, unless stated otherwise. Cite this article:
Grand Trunk Road Facts for Kids. Kiddle Encyclopedia.