Jalalabad is a city in eastern Afghanistan. Jalalabad is the capital of Nangarhar province. It is linked by about 90 miles (140 km) of road with Kabul to the west. Sunni Islam is the main religion of the people.

Jalalabad is a leading center of social and trade activity because of its proximity with the Torkham border crossing, 65 km (40 mi) away. Major industries include paper-making, as well as agricultural products including oranges, rice, and sugarcane. It has six districts and a total land area of 12,796 hectares (31,620 acres). The total number of dwellings in this city is 39,586. 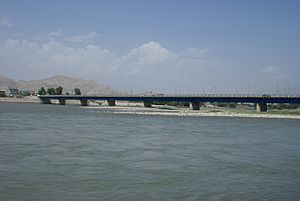 Kabul River running through the city

Jalalabad is home to a large number of fruits. Various types of citrus fruits like orange, tangerine, grapefruit, lemon, lime grow in gardens as well as in orchards. The orange trees yield a crop only once in three years. The narindj variety of orange is the most common one which has yellow skin and its taste is a combination of orange and grapefruit. The grapefruits grown here have a diameter of eight or nine inches.

Per year 1800 tonnes of pomegranates, 334 tones of grapes, and 7750 tones of mulberries are produced in Jalalabad. The fruits are either sold in local markets or transported to Kabul markets from where they are exported. The second most common crop is local vatani variety of sugarcane. It contains 15% sugar by weight. 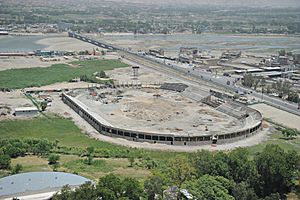 Jalalabad is considered one of the most beautiful cities of Afghanistan. It has plenty of greenery and water. On the southeastern fringe of Jalalabad, a modern suburb called Ghazi Amanullah Town is under construction. Named after King Amanullah Khan, it is said to be the first, the biggest and the most modern township in the history of Afghanistan.

Jalalabad is considered the capital of Afghan cricket, with many of the national players coming from the surrounding areas. Construction has begun near the city on one of Afghanistan's cricket stadiums. It is hoped that this ground will serve the domestic competition and attract international teams.

All content from Kiddle encyclopedia articles (including the article images and facts) can be freely used under Attribution-ShareAlike license, unless stated otherwise. Cite this article:
Jalalabad Facts for Kids. Kiddle Encyclopedia.