Anantnag is a city and a municipality, capital of the Anantnag district in the Indian union territory of Jammu and Kashmir.

Anantnag is located at a distance of 53 kilometres (33 miles) from the state's capital Srinagar. It is the third largest city in Jammu and Kashmir after Srinagar and Jammu with an urban population of more than 200,000 and municipal limit population over 100,000.

The name Anantnag is thought to originate from the Sanskrit term ananta, meaning "infinite", and Kashmiri word naga, "water spring"; Anantnag would then mean "numerous springs", as there are indeed many springs in the town.

The name Islamabad is believed to have derived from the name of a Mughal governor Islam Khan who built a garden in the area. 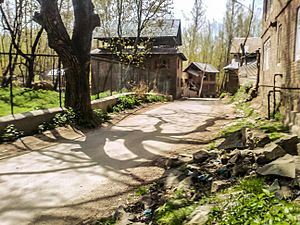 A road through Anantnag

Lal Chowk is the city square, it is where Jawaharlal Nehru raised the Indian National Flag in 1948, as Jammu and Kashmir joined India.

Masjid Baba Dawood Khaki is among the oldest mosques in the city, being built around 1400 CE. 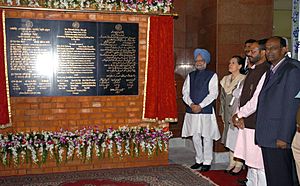 The Prime Minister Dr. Manmohan Singh at the dedication for the New Rail Line in 2008

In 2010 Anantnag was declared as major City of Export excellence This is due to the centralized position and presence of high concentration of troops and migrant laborers in it.

Anantnag has a good position lying on the main North-South Corridor Road, and with the highest number of tourist destinations it an economic hub of Kashmir Valley.

The city suffered heavily during conflict times of the 1990s; many roads, bridges, and government buildings were reduced to ash. But in the 2000s, it made a quick recovery. It has been listed among 100 fastest economically developing cities.

All content from Kiddle encyclopedia articles (including the article images and facts) can be freely used under Attribution-ShareAlike license, unless stated otherwise. Cite this article:
Anantnag Facts for Kids. Kiddle Encyclopedia.