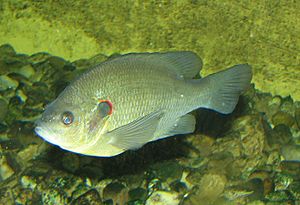 Centrarchidae or sunfish are a family of freshwater ray-finned fish. They belonging to the order Perciformes. The type genus is Centrarchus (consisting solely of the flier, C. macropterus). The family's 37 species include many fish familiar to North Americans, including the rock bass, largemouth bass, bluegill, pumpkinseed, and crappies. All are native only to North America. Family members are distinguished by having from five to 13 dorsal spines number. Sizes of most are in the 20 to 30 cm (7.9 to 11.8 in) range. However, some are much smaller, with the black-banded sunfish at just 8 cm (3.1 in) in length, while the largemouth bass is reported to reach almost 1 m (3.3 ft) in extreme cases.

The male of most species builds a nest by hollowing out a depression using his tail, then guards the eggs. Most sunfish are valued for sport fishing. They have been introduced in many areas outside their original ranges, sometimes becoming an invasive species.

All content from Kiddle encyclopedia articles (including the article images and facts) can be freely used under Attribution-ShareAlike license, unless stated otherwise. Cite this article:
Centrarchidae Facts for Kids. Kiddle Encyclopedia.