The bluegill (Lepomis macrochirus) is a species of freshwater fish sometimes referred to as "bream", "brim", "sunny", or "copper nose". It is a member of the sunfish family Centrarchidae of the order Perciformes. It is native to North America and lives in streams, rivers, lakes, and ponds. It is commonly found east of the Rockies. It usually hides around and inside old tree stumps and other underwater structures. It can live in either deep or very shallow water, and will often move from one to the other depending on the time of day or season. Bluegills also like to find shelter among aquatic plants and in the shade of trees along banks.

Bluegills can grow up to 12 inches (30 cm) long and about 4 1⁄2 pounds (2.0 kg). While their color can vary from population to population, they typically have a very distinctive coloring, with deep blue and purple on the face and gill cover, dark olive-colored bands down the side, and a fiery orange to yellow belly. The fish are omnivores and will eat anything they can fit in their mouth. They mostly feed on small aquatic insects and fish. The fish play a key role in the food chain, and are prey for bass, other (sunfish), northern pike, walleye, muskies, trout, herons, kingfishers, snapping turtles, and otters. 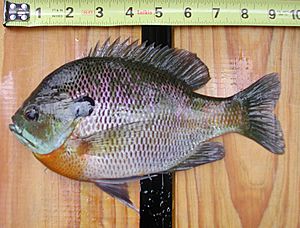 The bluegill is most closely related to the orangespotted sunfish and the redear sunfish, but different in a distinct spot at or near the base of the soft dorsal fin. 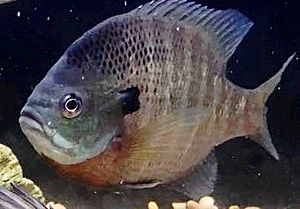 The bluegill occurs naturally in the United States east of the Rocky Mountains from coastal Virginia to Florida, west to Texas and northern Mexico, and north to western Minnesota and western New York. Today they have been introduced to almost everywhere else in North America, and have also been introduced into Europe, South Africa, Zimbabwe, Asia, South America, and Oceania. Bluegills have also been found in the Chesapeake Bay, indicating they can tolerate up to 1.8% salinity.

In some locations where they have been transplanted, they are considered pests: trade in the species is prohibited in Germany and Japan. In the case of Japan, bluegills were presented to the then-crown prince, Akihito in 1960 as a gift by Richard J. Daley, mayor of Chicago. The prince, in turn, donated the fish to fishery research agencies in Japan, from which they escaped and became an invasive species that has wreaked havoc with native species, especially in Lake Biwa in Shiga Prefecture. The Daijō Tennō has since apologized.

Bluegill live in the shallow waters of many lakes and ponds, along with streams, creeks, and rivers. They prefer water with many aquatic plants, and seclude themselves within or near fallen logs, water weeds or any other structure (natural or manmade) that's underwater. They can often be found around weed beds, where they search for food or spawn. In the summer, adults move to deep, open water where they suspend just below the surface and feed on plankton and other aquatic creatures. Bluegill try to spend most of their time in water from 60 to 80 °F (16 to 27 °C), and tend to have a home range of about 320 square feet (30 m2) during nonreproductive months. They enjoy heat, but do not like direct sunlight – they typically live in deeper water, but will linger near the water surface in the morning to stay warm. Bluegill are usually found in schools of 10 to 20 fish, and these schools will often include other panfish, such as crappie, pumpkinseeds, and smallmouth bass.

Young bluegills' diet consists of rotifers and water fleas. The adult diet consists of aquatic insect larvae (mayflies, caddisflies, dragonflies), but can also include zooplankton, shrimp, crayfish, leeches, snails, and other small fish. If food is scarce, bluegill will also feed on aquatic vegetation and algae, and if scarce enough, will even feed on their own eggs or offspring. As bluegill spend a great deal of time near the surface of water, they can also feed on surface bugs. Most bluegills feed during daylight hours, with a feeding peak being observed in the morning and evening (with the major peak occurring in the evening). Feeding location tends to be a balance between food abundance and predator abundance. Bluegill use gill rakers and bands of small teeth to ingest their food. During summer months, bluegills generally consume 3.2 percent of their body weight each day. To capture prey, bluegills use a suction system in which they accelerate water into their mouth. Prey comes in with this water. Only a limited amount of water is able to be suctioned, so the fish must get within 1.75 centimeters of the prey.

In turn, bluegill are prey to many larger species, including largemouth bass, smallmouth bass, striped bass, trout, muskellunge, turtles, northern pike, yellow perch, walleye, catfish, and even larger bluegill. Herons, kingfishers, and otters have also been witnessed catching bluegill in shallow water. However, the shape of the fish makes them hard to swallow. Raccoons are also believed to be among their predators.

Bluegills have the ability to travel and change directions at high speeds by means of synchronized fin movements. They use notched caudal fins, soft dorsal fins, body undulations, and pectoral fins to move forward. Having a notched caudal fin allows them to accelerate quickly. The speed of their forward motion depends on the strength of which they abduct or adduct fins. The flat, slender body of the bluegill lowers water resistance and allows the bluegills to cut effectively through water. The large, flexible pectoral fins allow the fish to decelerate quickly. This superior maneuverability allows the bluegill to forage and escape predators very successfully. Bluegills have a lateral line system, as well as inner ears, that act as receptors for vibration and pressure changes. However, bluegills rely heavily on sight to feed, especially in their foraging. Optimal vision occurs in the daylight hours. The mouth of the bluegill is very small and requires the use of the pharynx to suck in prey.

Hybridization with other species

Occasionally a bluegill may spawn with another member of its genus, though this is rare. This tends to happen in bodies of water that are fairly isolated and have a decent population of bluegill in close proximity to another, smaller, population of lepomid species such as green sunfish. Limited nesting grounds can also factor in hybridization causing the females of one species to prefer the nest of another. Bluegill can theoretically hybridize with all other species in the genus lepomis, though the most common hybrid is the greengill.

The bluegill is the state fish of Illinois. 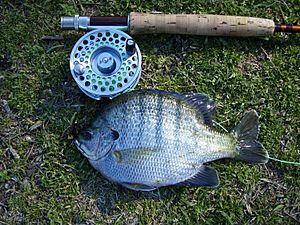 Bluegill caught in an Alabama pond

Bluegills are popular panfish, caught with live bait such as worms, crickets, grasshoppers, flies, minnows, maggots or small frogs, as well as small shrimp bits, processed bait, bread, corn, other table scraps, small crankbaits, spinners, fake worms, or even a bare hook. They mostly bite on vibrant colors like orange, yellow, green, or red, chiefly at dawn and dusk. They are noted for seeking out underwater vegetation for cover; their natural diet consists largely of crickets, water bugs, larvae, and very small fish. The bluegill itself is also occasionally used as bait for larger game fish species, such as blue catfish, flathead catfish and largemouth bass.

Fishermen are sometimes able to use polarized sunglasses to see through water and find bluegills' spawning beds. Bluegill have a rather bold character; many have no fear of humans, eating food dropped into the water, and a population in Canada's Lake Scugog will even allow themselves to be stroked by human observers. Because of their size and the method of cooking them, bluegills are often called panfish.

Bluegill populations are notably vulnerable to effects of angling and harvest, particularly in size-structure. Large males appear to be especially vulnerable to effects of fishing because of their tendency to guard nests in the center of colonies. Populations with large males are increasingly difficult to find, and are usually only found in remote locations without angling pressure or in more southern regions where growth rates are high. Reduced bag limits appear to show potential for improving size-structure in over-fished populations.

Bluegills play an important role in pond and lake management to keep crustacean and insect populations low, as a single bluegill population may eat up to six times its own weight in just one summer.

All content from Kiddle encyclopedia articles (including the article images and facts) can be freely used under Attribution-ShareAlike license, unless stated otherwise. Cite this article:
Bluegill Facts for Kids. Kiddle Encyclopedia.