Lake Lanier (officially Lake Sidney Lanier) is a reservoir in the northern portion of the U.S. state of Georgia. It was created by the completion of Buford Dam on the Chattahoochee River in 1956, and is also fed by the waters of the Chestatee River. The lake encompasses 38,000 acres (150 km2) or 59 square miles (150 km2) of water, and 692 miles (1,114 km) of shoreline at normal level, a "full pool" of 1,071 feet (326 m) above mean sea level and the exact shoreline varies by resolution according to the coastline paradox. Named for Confederate Army poet Sidney Lanier, it was built and is operated by the U.S. Army Corps of Engineers for flood control and water supplies. Its construction destroyed more than 50,000 acres (20,000 ha) of farmland and displaced more than 250 families, 15 businesses, and relocated 20 cemeteries along with their corpses in the process.

It is patrolled by the Georgia Department of Natural Resources (GDNR), as well as local law enforcement. The states of Georgia, Alabama and Florida all have rights to the water of the reservoir, as it feeds rivers going through those areas. The Corps of Engineers has responsibilities to regulate flow for flood control and water use. In addition, it has to ensure that water is available to fulfill such federal mandates as under the Endangered Species Act, to support downstream species. The rapid suburbanization of the Atlanta region, in particular, has greatly increased water consumption by private homeowners for lawns and gardens. During droughts of the 21st century, Lake Lanier reached record lows, and regional actions have been needed to reduce area water usage.

The lake is in Hall, Forsyth, Dawson, Gwinnett, and Lumpkin counties, split about 60%, 30%, 5%, 4%, and 1% respectively, filling the valley into numerous small arms and fingers. The former thalweg of the Chestatee and the Chattahoochee south of it form the county line between Hall and a corner of Gwinnett to the east, and Dawson and Forsyth counties to the west.

One of the main purposes of the lake is flood control of the Chattahoochee River downstream, mainly protecting metro Atlanta. Since the construction of Buford Dam, there have been only three major flooding events on the downstream section. The most severe flooding event was in 2009, following a two-year drought; the most recent was in 2013.

The lake's original purposes were to provide hydroelectricity, navigation, and flood control of the Chattahoochee River, and water supply for the city of Atlanta.

The $1 billion project was approved, with ground breaking in 1950. Approximately 700 families were moved from the area after their properties were bought by the USCOE, in order to flood the area and create the lake. A stretch of Georgia Highway 53 had to be abandoned that ran too close to the planned shoreline. Gainesville's Looper Speedway was also condemned and abandoned.

More than $2 million had been spent by the Corps on preliminary construction when the House Committee on Appropriations refused to provide more funds in June 1951. During that summer Atlanta mayor William Hartsfield traveled to Washington numerous times pressing southern Democratic Senators Richard Russell, Jr. and Walter F. George to restore funding to ensure Atlanta's water supply during droughts. Hartsfield returned to Washington in 1955 to lobby for $11 million more for the dam, which had a target date of 1956, again stressing the importance of an adequate water supply for his growing city. Congress approved the funds, and the dam was completed and opened on schedule.

Lake Lanier began filling in 1956, and in 1957, 20 miles downstream, Morgan Falls Dam was raised to regulate the flow from Buford Dam and regulate the flow of water to Atlanta. In early fall of 1958, the region had two solid months of drought, which would have left the Chattahoochee and its tributaries nearly dry, if not for the construction of Buford Dam and the reserve of Lake Lanier.

Since the 1990s, the Corps of Engineers, Florida, Georgia, and Alabama have all been fighting for use of the water held in Lake Lanier. Federal law mandates that when a river flows between two or more states, each state has a right to an equal share of the water. Additionally, laws such as the Endangered Species Act require that water be available to preserve and support the threatened or endangered species that live in or around Chattahoochee River and Apalachicola Bay.

In June 2006, the USACE revealed that the new lake gauge at the dam, replaced in December 2005, was not properly calibrated, yielding a lake level reading nearly two feet (over half a meter) higher than the actual level. Because of this, nearly twenty-two billion U.S gallons (over eighty-two billion liters) of excess water had been released. This was above the already planned excess releases to support the successful spawning of gulf sturgeon in the Apalachicola River and to protect several species of mussels in Apalachicola Bay from excessive saltwater intrusion.

Georgia Governor Sonny Perdue said that the Corps had created a "manmade drought", because most of the state was already having dry conditions. This came at a time when outdoor water-use restrictions were being put in place by local governments. The high rate of suburban growth in the area resulted in a high rate of water consumption to care for the many lawns which had replaced forests. Because of the error in managing Lake Lanier, the governor's office declared a drought and enacted a ban on outdoor water use from 10AM to 4PM, in addition to the permanent weekly odd/even address system. Other local counties imposed further restrictions or total bans, based on each water system's conditions. Outdoor watering was banned completely as the state suffered its worst drought in its recorded history.

On October 16, 2007, Governor Perdue gave the USACE until the evening of October 17 to come up with a plan for the continued release of water for Florida wildlife. Senator Johnny Isakson stood before the Georgia General Assembly saying, "The health, safety and welfare of people are threatened. They are threatened by an act this Congress passed that had no intention to threaten them." He eventually withdrew his threat to sue the Corps of Engineers, but the Lake Lanier Association indicated that it would file a private legal action. Governor Perdue's attempts to reach an agreement with Florida over water releases fell through, leaving the final decision on releases from the lake to be made by the U.S. Fish and Wildlife Service.

The record-low lake levels had revealed parts of the lake bottom not seen since the 1950s, including remnants of a road and foundations of homes that had to be abandoned for the construction. More recent additions to the lake - including discarded trash, boat batteries and sunken boats - were discovered. Local efforts were organized to clean up the lake bottom. Several automobiles, some stolen, and discarded firearms were also recovered by law enforcement officials. 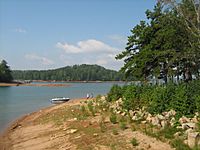 The lake is popular with boaters, houseboats, jetskiers and others, particularly around the summer holidays. Over 7.5 million people per year visit the lake, including its marinas and the Lake Lanier Islands waterpark. The rowing and sprint canoeing events during the 1996 Summer Olympics were held at the lake. It also hosted the canoe sprint World Championships in 2003 at the Lanier Canoe and Kayak Club.

Lake Lanier has over 90 Corps, State, County and City parks spread around its 680 miles of shoreline, 23 of which provide swim beaches. All of these parks are accessible by land and some by water and most have other amenities such as picnic areas, restrooms, boat ramps and playgrounds for the kiddies. There are also dozens of beaches on Lake Lanier that are on islands located all over Lake Lanier.

One resort hotel sits on the lake: Legacy Lodge (Formerly Emerald Pointe Hotel). A second hotel, Pine Isle was recently demolished. Both were sold by CNL Hotels & Resorts, a hotel investment firm in Florida, to Georgia businessman Virgil Williams. Both assets sit on a ground lease from the Lake Lanier Islands Development Authority which in turn leases the land from the U.S. Army Corps of Engineers.

Established in 1957, Holiday Marina has become synonymous with Lake Lanier. Holiday Marina in Buford, Georgia, and Aqualand Marina near the town of Flowery Branch, are two of the largest freshwater marinas in the world.

Lake Lanier was the site of the 1997 Bilderberg conference.

Every year from mid-November through January, Lake Lanier Islands are decorated with over 6 miles (9.7 km) of Christmas lights, the largest animated light show in the southeast and one of the world's largest light shows. Magical Nights of Lights is an animated drive-through display that ends with a Christmas village, carnival rides, bonfire, Santa Shop, live nativity, etc.

The dropping water level slowed to 0.05 ft (0.02 m), as measured on November 17, 2007, after local rains continued and the water flow had been reduced at Buford Dam. However, water levels continued to decline almost daily during the month of December 2007 (see table below; December record low levels in bold-face font).

Multiple rain storms further to the south, along the Chattahoochee River to Apalachicola Bay, brought increased fresh water to the Florida wildlife in November and December 2007, despite the reduced water flow from Lake Lanier at Buford Dam. Rainfall along the lower Chattahoochee River was often greater overall than above Lake Lanier, as it spanned the longer length of the river.

In 2011 and 2012 the water fell to some of the lowest points on record set during the 2007 droughts. In the spring and summer of 2013, the water level reached some of the highest points due to high amounts of rain and flooding in the north Georgia area. By late June 2016, the southern parts of Forsyth County were having severe drought, and water use was ordered to be reduced.

All content from Kiddle encyclopedia articles (including the article images and facts) can be freely used under Attribution-ShareAlike license, unless stated otherwise. Cite this article:
Lake Lanier Facts for Kids. Kiddle Encyclopedia.