Kids Encyclopedia Facts
Not to be confused with Dawson, Georgia.

Dawson County is a county located in the north-central portion of the U.S. state of Georgia. As of the 2010 census, the population was 22,330. The county seat is Dawsonville.

Dawson County is included in the Atlanta-Sandy Springs-Roswell, Georgia Metropolitan Statistical Area. Its natural resources include Amicalola Falls, the highest falls in Georgia and one of the Seven Natural Wonders of the state.

Dawson County was created on December 3, 1857 from Gilmer and Lumpkin counties. It is named for William Crosby Dawson, a U.S. Senator from Georgia.

The county is known in auto racing circles for its long tradition of involvement in the sport as many of the original NASCAR racers were from this area. Many racing skills originally developed as a consequence of running moonshine down highway 9 to Atlanta, also known as Thunder Road. Celebrations of Dawson County's history and of its involvement occur every October with the Moonshine Festival.

Locals have referred to Dawson County as the Moonshine Capital of the World. This title is claimed by many other areas but is fiercely defended by residents of the area. This is due to the secluded area and the ability to move so much moonshine to the larger cities, especially Atlanta. 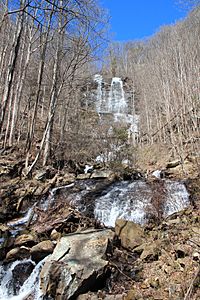 Part of Lake Lanier is in the southeastern part of the county and the boundary line with neighboring counties pass through the lake. The 729-foot (222 m) Amicalola Falls, are located in the county. The Amicalola Falls are the highest in Georgia, the tallest cascading waterfall east of the Mississippi River and are one of the Seven Natural Wonders of Georgia. The highest point in the county is Black Mountain, with an elevation of 3,600 feet (1,100 m). 6,760 acres (27.4 km2), which is located in the Chattahoochee National Forest. The Chestatee and Etowah rivers flow through Dawson County.

There are large, gated private communities that function similar to a municipality providing many municipal-type services that operate independent of county government.

All content from Kiddle encyclopedia articles (including the article images and facts) can be freely used under Attribution-ShareAlike license, unless stated otherwise. Cite this article:
Dawson County, Georgia Facts for Kids. Kiddle Encyclopedia.