Pickens County is a county located in the north-central portion of the U.S. state of Georgia. As of the 2010 census, the population was 29,431. The county seat is Jasper. Pickens County is part of the Atlanta-Sandy Springs-Roswell, Georgia metropolitan statistical area.

The Georgia General Assembly passed an act on December 5, 1853 to create Pickens County from portions of Cherokee and Gilmer counties. Pickens received several more land additions from Cherokee (1869) and Gilmer Counties (1858 and 1863); however several sections of Pickens County have also been transferred to other counties: Dawson County (1857), Gordon County (1860), and Cherokee County (1870).

Most of Pickens County's early industry revolved around the marble industry. Georgia Marble Company is located in Marble Hill near Tate. The Tate Elementary school is built out of marble. The marble was also used to make the statue of Abraham Lincoln in the Lincoln Memorial. Most of the marble is white, but there is also very rare pink marble. It is one of the few places in the world where pink marble is found. The marble is also used for tombstones for the United States Military.

Pickens County has seen very rapid growth with the building of Georgia State Route 515, locally referred to as the '4 lane'. Many new businesses and residents continue to move to Pickens County. 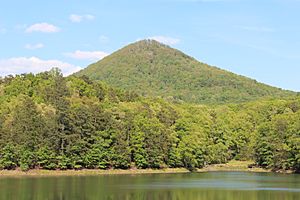 A significant portion of the county population resides in these three communities. These are large, gated private communities that function similar to a municipality providing many municipal-type services that operate independent of county government.

All content from Kiddle encyclopedia articles (including the article images and facts) can be freely used under Attribution-ShareAlike license, unless stated otherwise. Cite this article:
Pickens County, Georgia Facts for Kids. Kiddle Encyclopedia.