Mount Oglethorpe is a mountain located in Pickens County, Georgia, USA. The southernmost peak in the Blue Ridge Mountains, the mountain has an elevation of 3,288 feet (1,002 m), making it the highest point in Pickens County.

With an elevation of 3,288 feet (1,002 m), Mount Oglethorpe is the tallest mountain in Pickens County. The mountain is also considered to be the southern terminus of the Blue Ridge Mountains. 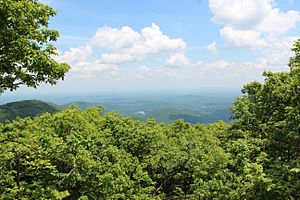 Mount Oglethorpe had been settled by the Cherokees since at least the 1700s. The Cherokees bent trees to mark their trails and shelters on the mountain. White settlers began moving into the area after the Georgia Land Lotteries of the early 1800s.

There were several reasons for choosing the Mountain Oglethorpe as the southern terminus. The mountain was considered to be the southern end of the Blue Ridge Mountains. The decision was also influenced by Sam Tate, an influential local businessman and president of the Georgia Marble Company. Tate was planning to build a resort on a nearby mountain and wanted the trail to pass by his resort. To convince the Georgia Appalachian Trail Club to choose Mount Oglethorpe, Tate donated money to build trail structures and allowed the trail to pass through his privately owned lands.

In 1937, with the completion of the Appalachian Trail, Mount Oglethorpe officially became the southern terminus of the trail. Early thru-hikers of the Appalachian Trail such as Grandma Gatewood, Gene Espy and Earl Shaffer began their journeys at Mount Oglethorpe. In 1949, James E. Boyd conducted long-range line-of-sight experiments between the mountain and Georgia Tech to study the effects of weather on microwave propagation.

After the Appalachian Trail

Communication and FAA towers were installed on the mountain's summit in the years after the southern terminus was moved. In the 1970s, the Big Canoe community started development on the eastern side of Mount Oglethorpe. Vandalism, harsh weather and lightning strikes caused heavy damage to the Oglethorpe Monument, leading to its relocation to downtown Jasper in 1999. Portions of the Appalachian Trail that used to run between Mount Oglethorpe and Springer Mountain were made inaccessible to the public. In addition, Mount Oglethorpe's summit was closed to the public.

In 1995, Ken Rice and his wife Billie Ann purchased about 107 acres (43 ha) of land around Mount Oglethorpe's summit. In 2014, the Rices opened the mountain to the public when they designated their property as a public park. This public park, named Eagle's Rest, contains hiking trails and observation decks.

Before 2014, visitors were unable to access the summit without trespassing. After the summit was opened to the public, Mount Oglethorpe's summit can be reached by driving south from Georgia State Route 136 on Monument Road for about 5 miles (8.0 km). The summit can also be accessed from the south through Big Canoe.

All content from Kiddle encyclopedia articles (including the article images and facts) can be freely used under Attribution-ShareAlike license, unless stated otherwise. Cite this article:
Mount Oglethorpe Facts for Kids. Kiddle Encyclopedia.